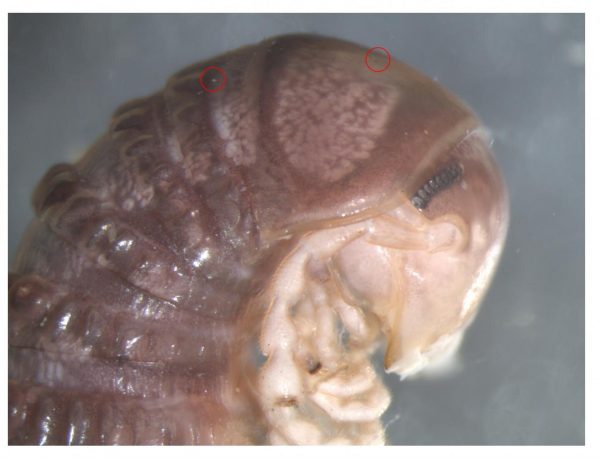 Twitter has given us a terrifying (and tiny) new species. A group of scientists have  discovered, on a photo seen on twitter, a new species. The species has been named, appropriately, Troglomyces twitteri. Here’s more from the paper on   as presented in MycoKeys:

After the observation of a shared photo of a North American Cambala annulata (Say, 1821) millipede on Twitter (Fig. 1), we identified the presence of Laboulbeniales on this specimen. Subsequently, we decided to screen Cambala millipedes in museum collections resulting in the discovery of an undescribed species in the laboulbenialean genus Troglomyces, which was found on several specimens. This new species is formally described here.

Laboulbeniales are highly specialized arthropod-associated fungi. The majority of the almost 2200 known species live on insects, although they also occur on other arthropod hosts. Recently, the number of Laboulbeniales associated with millipedes has increased considerably. Here we describe the first species of a Laboulbeniales fungus, Troglomyces twitteri sp. nov., from an American millipede. The new species was initially discovered on a photo of Cambala annulata (Say, 1821) from Ohio, USA, which had been shared on Twitter. A subsequent microscopic study of Cambala millipedes in museum collections in Denmark and France confirmed the discovery.

Comments Off on Troglomyces twitteri: The New Species Discovered Through Twitter