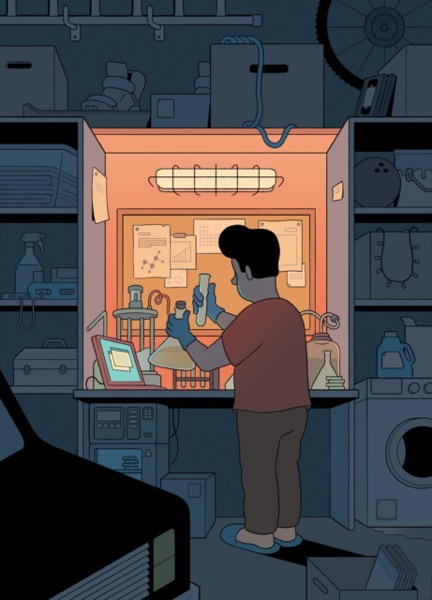 Great piece on the work being done by community labs and how that work fits (or doesn’t fit) into the broader scientific community, from The New Yorker.

One evening in February, I went to hear a lecture at the Baltimore Underground Science Space, a community lab in a former bottle-top factory. Like several dozen other “biospaces” around the country, bugss, as the lab is known, is animated by a spirit of subversive amateurism. Anybody can go there to learn about, and then do, the kind of cutting-edge bench science—gene editing, synthetic biology—that is generally confined to well-funded academic institutions and private corporations. Inside, a chalkboard with cartoon drawings of a microbe and a double helix welcomes newcomers, but the lab areas are seriously kitted out. bugss has a real-time PCR machine, the gadget that allows scientists to make millions of copies of a particular strand of DNA, in order to study and manipulate it. “We don’t have a lot else that’s super fancy,” Lisa Scheifele, the lab’s executive director, told me, though that might depend on how fancy you consider such items as a laminar-flow hood (“for working with cells and cultures that you really don’t want contaminated,” according to the lab’s Web site), an Alpha Innotech gel imager, or a negative-seventy–degree storage freezer. “We have what we need,” Scheifele said. “You can do most genetics here. You can do microbiology.”

Comments Off on The Rogue Experimenters