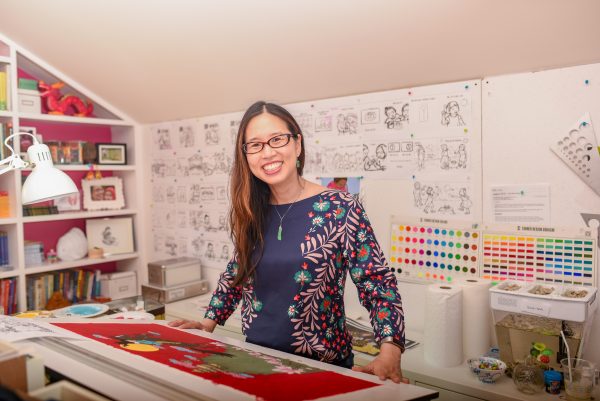 After attending the Rhode Island School of Design, Grace quickly set out to achieve her dream of creating children’s books. Her first book, THE UGLY VEGETABLES, was published in 1999 and was quickly heralded. As well as being an American Booksellers Association’s “Pick of the List” and a Bank’s Street College Best Books of the Year, THE UGLY VEGETABLES was nominated for the California Young Reader Children’s Choice Award and named a Growing Good Kids Book Award CLASSIC… Grace followed that success with the publication of over a dozen more books, including DIM SUM FOR EVERYONE! and LISSY’S FRIENDS. Grace’s first children’s novel, THE YEAR OF THE DOG was released to glowing praise in 2006 and nominated to the TX Bluebonnet list, which she followed with THE YEAR OF THE RAT. Her novel WHERE THE MOUNTAIN MEETS THE MOON was awarded the 2010 Newbery Honor, chosen for Al Roker’s Today Show Kid’s Book Club and was a NY Times Bestseller. Grace’s early reader LING & TING was awarded with the Theodor Geisel Honor in 2011.

I went to Rhode Island School of Design, to the horror of my parents. Because they are from Taiwan, going to art school seemed so foreign to them. It was almost like me saying, “I want to go to Mars.” But they trusted and supported me the best they could. After graduation, I sent out maybe a million postcards and promos to publishers, without much response. For a couple of years I worked fulltime designing T-shirts and mugs. When I got laid off, I took the severance package and went to New York, dropped off my portfolio and met with people. When I got back home, I got a phone call from Harold Underdown, who was senior editor at Charlesbridge then. He said, “I really like your new samples. Do you have a story to go along with them?” I said, “Yes, I do,” even though I didn’t. In the next week I wrote The Ugly Vegetables, which became my very first book.