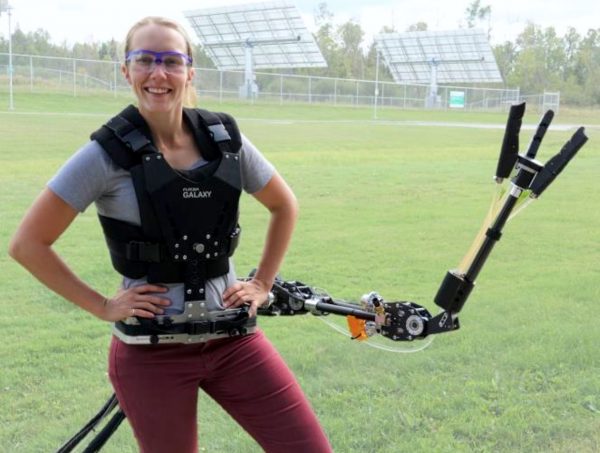 Researchers from Université de Sherbrooke in Canada have engineered a waist-mounted remote controlled hydraulic arm can smash through walls. Here’s more from IEEE:

This type of wearable robotic arm is known as a supernumerary robotic arm. The system created by the Canadian researchers (in partnership with Exonetik) has 3 degrees of freedom and is hydraulic, actuated by magnetorheological clutches and hydrostatic transmissions with the goal of “mimicking the performance of a human arm in a multitude of industrial and domestic applications.” Like wall punching. The hydraulic system provides comparatively high power, but the power system itself is connected to the user through a tether, minimizing how much mass the user has to actually wear (and keeping the inertia of the arm low) while also limiting mobility somewhat. Off-board power does put a bit of a dampener on the superhero potential, but in practical terms, users aren’t likely to be moving around all that much, and if they are, mobile options could include being tethered to an autonomous vehicle that follows you around or perhaps, eventually, a more portable backpack power unit.

Comments Off on Body-Mounted Robotic Arm Can Smash Through Walls