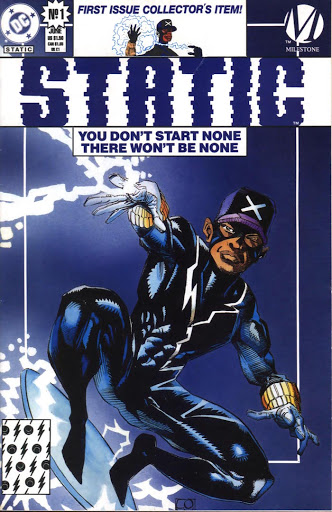 If you’re into Peter Parker / Spider-Man, you may quite like Virgil Ovid Hawkins / Static. Static was the teenage hero from Milestone Comics. If you’ve never heard of Milestone comics, here’s a primer from Nerdy POC:

Milestone Media was formed in 1993 by Denys Cowan, Michael Davis, Derek T. Dingle and the late great Dwayne McDuffie. Half of the original team cut their teeth at Marvel and DC before creating Milestone, with Denys Cowan being the primary artist on The Question series in 1987 and McDuffie creating the Damage Control series in 1988. Having worked in mainstream comics for several years, the founders came together to help rectify the issue of underrepresentation of minorities in comic books. Conducting meetings in Cowan’s living room and Davis’ basement, the creators sought to make more original black heroes who were the lead characters of their stories, not tokens or two-dimensional sidekicks.

Milestone Comics changed comics, and opened up the world for Black superheroes. And like all vibrant comic book universes, the world lived on long after the stories were being written. Milestone heroes joined the DC Universe during Flashpoint and then again for Final Crisis — but only one has endured. More from CBR:

After the death of Darkseid leading to the events of Final Crisis, the fabric of the DC Multiverse is split as the evil New God falls through reality itself. With the existence of the DakotaVerse threatened, the Shadow Cabinet superhero Dharma used a new power boost to merge the DakotaVerse with the DCU, with only Dharma, Icon and Superman aware of the two universes’ previous history before the fusion. The reborn Darkseid hired his Terror Titans to hunt down Static and brainwash him with the Anti-Life Equation but Static broke free of his control and joined the Teen Titans before the events of Flashpoint. After the reality-altering event, Static was merged into the DCU as having been part of the relaunched universe all along.