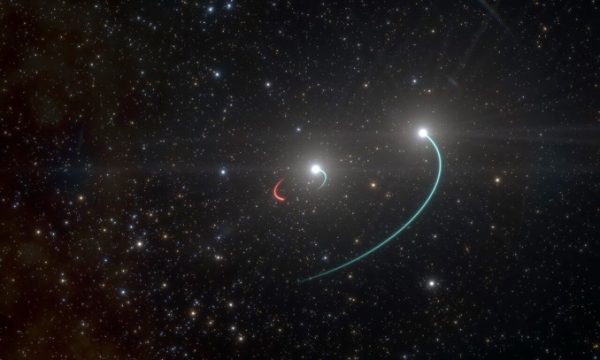 It turns out black holes are closer to the Earth than astronomers thought. In the constellation Telescopium, about 1,000 light years away, they’ve found a stellar mass black hole. Here’s more from Astronomy Now:

“We were totally surprised when we realised that this is the first stellar system with a black hole that can be seen with the unaided eye,” said Petr Hadrava, emeritus scientist at the Academy of Sciences of the Czech Republic in Prague and co-author of a study in the journal Astronomy & Astrophysics.

The star system, known as HR 6819, was observed as part of a study of binary star systems. Using the FEROS spectrograph with the European Southern Observatory’s MPG/ESO 2.2-metre telescope at the La Silla Observatory in Chile, researchers were surprised to find one of the visible stars, one with at least five times the mass of the sun, was orbiting an unseen body every 40 days. The second visible star is at a larger distance from the inner pair.