The Rift: An Afronaut’s Journey 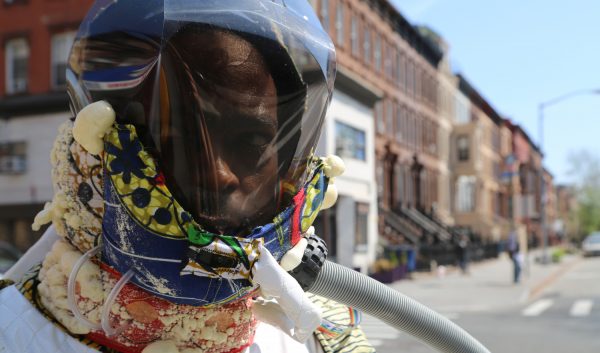 Artst and interactive designer Ayodamola Okunseinde, while researching future projections, found that “Africans and people of the African diaspora are largely left out of these conversations.” His studies left to a piece called The Rift, in which an afronaut travels back in time to try to understand the collapse of his culture. Here’s more from 21st Century Digital Art:

In documentation footage, you can see Okunseinde speaking with many people on the streets about his suit and his narrative. Okunseinde’s work is a part of a larger theme of AfroFuturism. The political landscape that Okunseinde is speaking to is vast, which make this conversation that much more important. The disenfranchisement of African-American people in America is severe and, more than anything, Okunseinde’s project is advocating for change. While Okunseinde was working on the project, he was assaulted by a police officer, which further propelled his work. He stated to Brooklyn Magazine:

“[He] wrestled me to the ground and all of a sudden, it just flashed in my head, ‘oh yeah, this is what happens. I can be killed right now like nothing.’ And that sort of sparked a lot of stuff in me, and propelled my thesis project for it. Since then, it’s been every month… every few weeks where you see something disgusting and vile. Not only an elimination of the representation of future projections, which then drives policy and perpetuates that elimination in the virtue sense, but then you have the physical elimination of bodies in the killing of black people and incarceration. It’s an existential issue now with this political quagmire that we’re in. We have an obligation to speak on it, and we do that through our work.”

Comments Off on The Rift: An Afronaut’s Journey