I thought it would be fun to take a look at some of the cyberpunk art and media that never got the attention and exposure that it deserved. First up is The Blue Lily, with story and art by Angus McKie. First published in April 1993 by Dark Horse, The Blue Lily was intended as a 4-part book, but only two issues ever came out.

The Blue Lily tells the story of Rusty Spade, a sentient robot who works as a private eye. “What starts out as a simple missing-persons case soon leads Rusty down a dizzying path of intrigue, high finance, and corporate crime, all set against a futuristic backdrop in which entire star systems are bought and sold on Wall Street.” 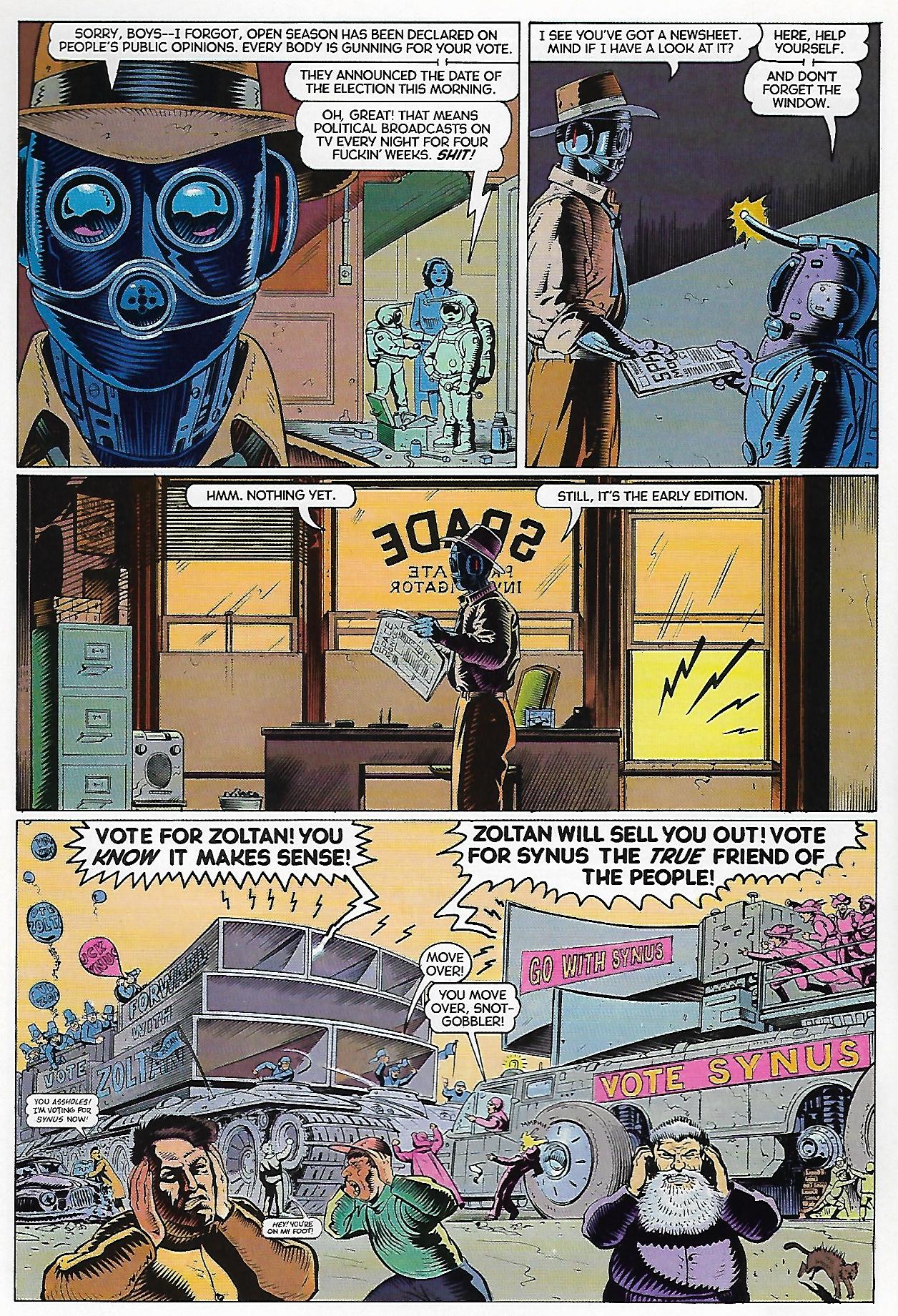 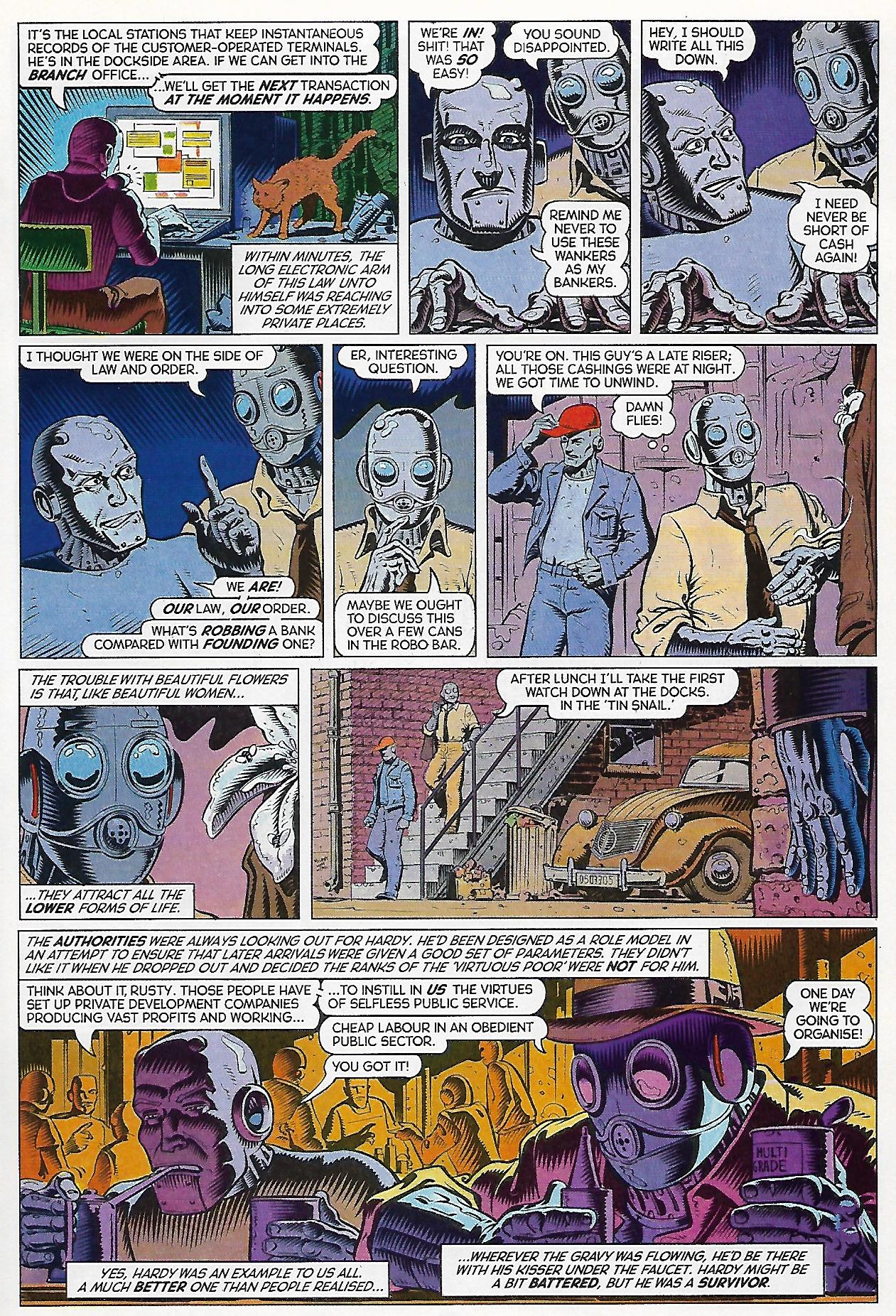 Here is the review of The Blue Lily #1 that I wrote in the Beyond Cyberpunk Update Stack in 1993:

The cover was the first thing that caught my attention. A banner at the bottom reads:

“Sex * Violence * Epistemology. What More Do You Need to Know?” Indeed!

So, does The Blue Lily, subtitled “Rusty Spade, Metaphysical Metal Detective,” deliver as advertised? Sex: No, almost no sex, at least in this, the first of four proposed volumes. Violence: Oh yeah, plenty of that, meticulously drawn and well choreographed. Epistemology? This proves to be the strength and weakness of The Blue Lily. McKie has attempted to create an overly self-aware robot hero who’s always contemplating his own existence — the great meaning of the mechanical and organic ALL. When he does it well, The Blue Lily rises above the rest and becomes something truly memorable and special. When he fails to get the tongue firmly implanted into his cheek while spouting forth on religion, logic, horticulture, and the foibles of humans and robot, it all starts to sound like a over-written episode of Mann and Machine. This is a very wordy comic book.

The setting for The Blue Lily is a timeless world where ’40s Chandler-esque gumshoes meet the sentient robots of the future. The main character, Rusty Spade, is a robot private dick straight out of The Big Sleep. In his world, robots, called Numbers, do all the grunt work. They are the service sector, the low-class citizens. As they’ve become more intelligent and self-aware, tensions have grown between them and their human makers. In true neoWobbly fashion, the robots have created an underground that is seeding rebellion among its metallic ranks. One of the neat things about The Blue Lily is this sub-plot (a minor theme for issue 1) which at times is reminiscent of Do Androids Dream of Electric Sheep and Blade Runner.

I found the mystery scenario engaging enough, the beautiful draftsmanship of the computer-based art compelling, and the brainy ‘bot characters to be very likable. I checked in and out of the sometimes strained, verbose dialog as I read it, but was won over by the end. I look forward to books 2-4.

Issues 1 & 2 of The Blue Lily are still readily available. Some years ago, Angus McKie started talking about finishing the series and posting it online, but as far as I know, this never happened.

Comments Off on Forgotten Cyberpunk Gems: The Blue Lily #cyberpunk