Today we celebrate Katharine Burr Blodgett,  was an American physicist and chemist known for her invention of “invisible” or nonreflective glass while working at General Electric. She was the first woman to be awarded a Ph.D. in physics from the University of Cambridge. 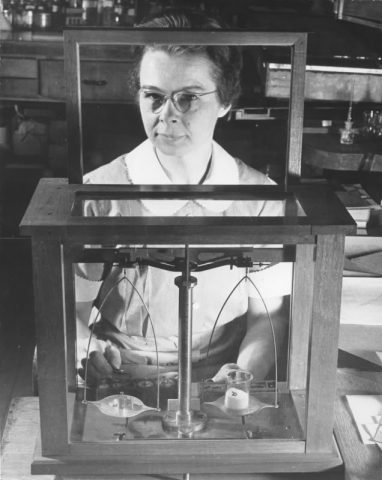 Katharine worked with Irving Langmuir who had worked with her father at the GE Research Lab.  They worked on thin films of only a few molecules thick. She developed a way to use single molecule thick coatings of barium to increase the amount of light passing through glass.  She developed non-reflective coatings for eyeglasses and improved lenses used in cinematography. She worked on two patents with Vince Schaefer, another great mind of GE at the time.

She developed a method using a color gauge to measure the thickness of thin monomolecular films in 1933.  Five years later she creates a system to make non-reflecting glass. Normal glass reflects a significant portion of light, however using a coating consisting of 44 layers of liquid soap at one molecule each (four millionths of an inch) she could get 99% of light to pass through the glass.  Later on engineers devised a way to create the same coating which would be durable and not wipe off.