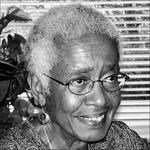 Thanks for sending in this article Walt! Walt says:
Please consider this “Hidden Figure” for your SMEOTW
spotlight. Ms. Preston was a key researcher at the NIH and Johns Hopkins
working in cancer research. Many articles can be found on
http://scholar.google.com where articles credit her as “AS Preston”.

see below an excerpt from her obituary in the washington post

She was a prodigious student which bore fruit. Agnes won grand prize for the national high school science fair. Unfortunately, the grand prize was given to a white student while Agnes was demoted to first runner up- a sign of the times. Mr. Curtis, a Dunbar teacher who also taught at Howard University recognized Agnes’ gifts. He registered Agnes at Howard where she took classes while still in high school. Agnes received a scholarship to Catholic University and upon graduation was recruited by The National Institute of Health (NIH). Agnes would forego getting her doctorate (perhaps regrettably later), contrary to encouragement to do so. She was already doing what doctors in her field were doing and to do so would interfere with exciting advancements her team were making.

Agnes retired in 1988 after over 35 years were spent as a scientist on Dr. Joseph Handler’s team at NIH, this during a time when like in the film, “Hidden Figures”, the racial climate in the United States left true contributions of African Americans under- represented, if represented at all. Agnes retired NIH highly respected leaving behind a legacy of vital research, discoveries, and published works (some of which can be found on Google Scholars) informing, in part, what we know about and how we treat cancer today.

read more about her life!

Filed under: Women In STEM —
Tags: nih, women in steam — by Jessie Mae

Comments Off on Agnes Preston key researcher at the NIH