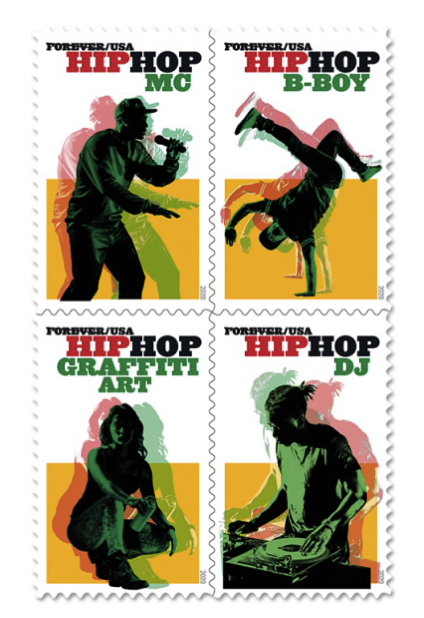 You can order the Hip Hop stamp from USPS now on their website! This interview with USPS art director Antonio Alcalá comes via PRINT!

I was thinking the other day about how radical and controversial Public Enemy and Run-D.M.C. were during the early hip hop days— four decades ago?—when music, graphics and politics mingled with anti-establishment protest and rebellion. Hip Hop has come a long way culturally, politically and commercially as an American urban creation. How were you able to navigate the history of Hip Hop into a stamp series that was consistent with its evolution?
Your question touches on one of the key challenges when making a stamp: how to condense a vast story into a minuscule image that satisfies a broad spectrum of the public. In short, it’s impossible. There will always be someone who takes issue with the way you’ve rendered the subject. I remind myself complaints about the artwork are reminders that people still care about stamps and what they represent. That’s a good thing.

More specifically, it took a fair amount of time and effort to get to a set of hip hop stamp designs that USPS was enthusiastic about issuing.

Hip Hop has a long and rich history, and from the start, I knew I wouldn’t be able to represent its totality in one set of stamps. But because it is such an important part of our nation’s art, and one of our most significant cultural contributions to the world, I knew we needed to at least begin representing it somehow. Hip Hop has four widely recognized key elements, or “pillars”: Rap, DJs, Graffiti, and B-boying (known more broadly as break-dancing). Using contemporary images that quickly and accurately depict the genres eased the burden of having to represent the many histories within the subject.

Read the rest of the interview here and pick up a sheet of your own!