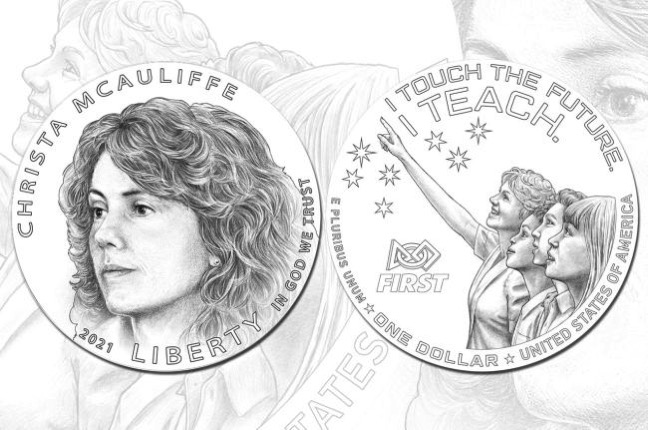 In 2019 congress voted to issue a coin to commemorate ‘Teacher in Space’ Christa McAuliffe. the U.S. Mint’s artists developed 12 candidate designs,
Via Space.com

A new U.S. silver dollar will depict the first teacher to launch towards outer space in a way that is representative of all educators, should the recommendations of two advisory panels and the desires of the late astronaut’s family be followed.

Christa McAuliffe, who died on board the ill-fated launch of NASA’s space shuttle Challenger in 1986, will be memorialized on the coin, as was authorized by Congress in 2019. The 2021 Christa McAuliffe Silver Dollar Commemorative Coin will be released for sale 35 years after the Challenger tragedy.

“The legislation mandates that coins minted under this act shall bear an image and the name of Christa McAuliffe on the obverse and depict the legacy of Christa McAuliffe as a teacher on the reverse,” April Stafford, director of the U.S. Mint’s Office of Design Management, said at a meeting of the Citizens Coinage Advisory Committee (CCAC) that was held by teleconference on Tuesday (June 23).