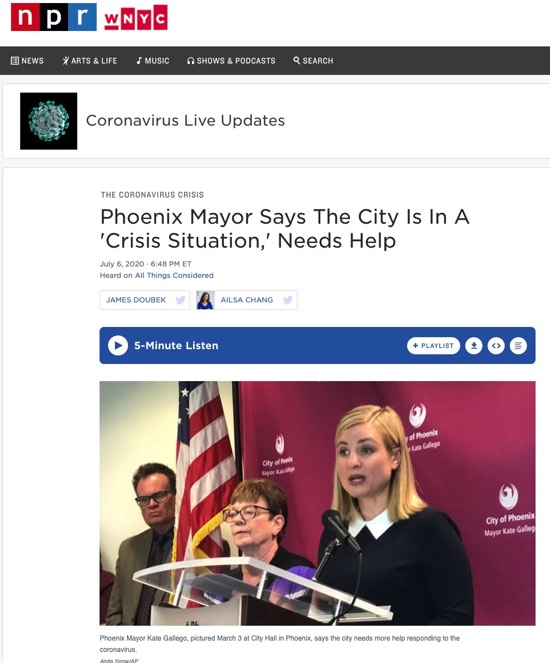 Starting at the 2 minute, 24 seconds in – Phoenix Mayor Kate Gallego says Phoenix does not have a public health department, and that librarians and park service employees are helping step up the COVID-19 testing needs…

“We don’t have a public health department at the City of Phoenix, so I’ve had amazing public works, library and parks employees to help us step up with testing. I’m grateful that they’ve been willing to do it, but I would love to see a more coordinated national effort to help communities like Phoenix. It’s heartbreaking to see someone who’s aching try to refill a gasoline tank because they’ve been sitting in a line for hours.”

Back in March of 2011, at MAKE Magazine I wrote an article called “Is It Time to Rebuild & Retool Public Libraries and Make “TechShops”? – it was an attempt to outline some of what libraries could do and add to meet the demands of the community for high tech skill building (3D printers, fabrication, engineering, and more).

9 years later, TechShop went bankrupt, a lot of libraries have evolved to fantastic makerspaces, however I completely missed that libraries would be on the front line in a major city for a national pandemic crisis for testing needs. I’m still processing that the Mayor of Phoenix is 1) Stating there is no health department in Phoenix and 2) Librarians are needed to step up to help with COVID-19 testing.

A snapshot of stats so I can look back this later, Maricopa County reported a COVID-19 positivity rate of 28.8%. The USA hit about 3m cases today, 130k dead, with 58,000 new cases today, the most infections in a single day in the USA since the pandemic started around March 2020. 56 Florida hospital ICUs have hit capacity, 10k cases in Texas today (most in one day so far). FL announced all schools are re-opening next month (August), and NY has not decided for sure yet if the schools will open in September. NYC unemployment is about 20 percent, “a figure not seen since the Great Depression. At least one million jobs…”

I have another article about the postal service from January of 2012 called “How Makers, Hackers, and Entrepreneurs Can Save the U.S. Postal Service” … the postal service has been in the news about it’s potential demise for awhile, this year an election may hinge on mail in ballots due to the pandemic. I did not have “voting” in any form in that article, but have mentioned open-source hardware based voting machines over the years.

Filed under: covid-19 — by phillip torrone

Comments Off on Phoenix librarians helping with COVID-19 testing? 7/7/2020