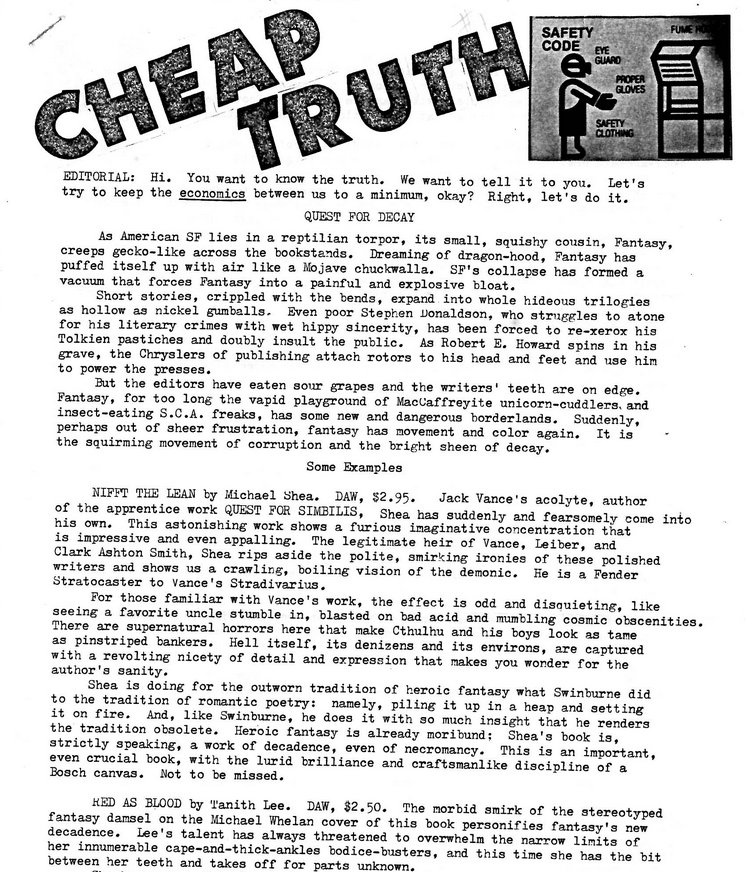 Every revolutionary needs a house organ, a voice to amplify its ideas and demands. Cyberpunk was no exception and that early house organ was the two-page typewritten zine in the 1980s edited by Vincent Omniaveritas, aka Bruce Sterling. It was here, over 18 issues in the 1980s, that Sterling and a few guest authors articulated the ideas behind “The Movement” and the loose-knit band of authors dubbed The Mirrorshades Group (later labeled “cyberpunks” by sci-fi editor and author Gardner Dozois).

From the first issue:
Quest for Decay

As American SF lies in a reptilian torpor, its small, squishy cousin, Fantasy, creeps gecko-like across the bookstands. Dreaming of dragon-hood, Fantasy has puffed itself up with air like a Mojave chuckwalla. SF’s collapse has formed a vacuum that forces Fantasy into a painful and explosive bloat.

Short stories, crippled with the bends, expand into whole hideous trilogies as hollow as nickel gumballs. Even poor Stephen Donaldson, who struggles to atone for his literary crimes with wet hippy sincerity, has been forced to re-xerox his Tolkien pastiches and doubly insult the public. As Robert E. Howard spins in his grave, the Chryslers of publishing attach rotors to his head and feet and use him to power the presses.

But the editors have eaten sour grapes and the writers’ teeth are on edge. Fantasy, for too long the vapid playground of McCaffreyite unicorn-cuddlers and insect-eating SCA freaks, has some new and dangerous borderlands. Suddenly, perhaps out of sheer frustration, Fantasy has movement and color again. It is the squirming movement of corruption and the bright sheen of decay.

Gee, Chairman Brucie, tell us what you really think!

You can read all of the back issues of the Truth in the collected PDF here or access them separately here.

And don’t forget to watch Julia Grillmayr’s presentation on the significance of Cheap Truth for the Cyberpunk Culture Conference, currently in progress.

Comments Off on Cheap Truth, the Original Cyberpunk Zine #cyberpunk