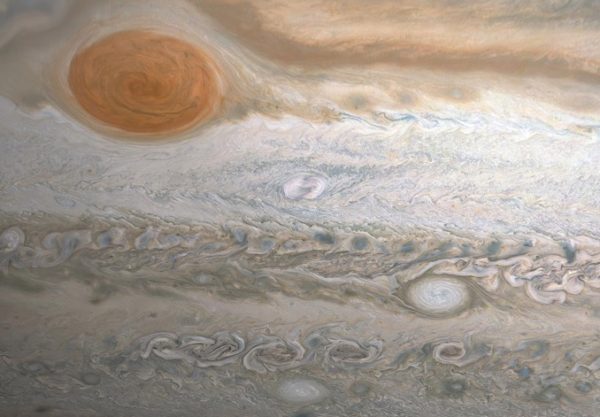 You’ve heard of the Big Red Spot, but here’s an amazing photo from Juno that include’s another superstorm on Juper, Clyde’s Spot. Here’s more from Astronomy Now:

On 31 May, Clyde Foster, an amateur astronomer of Centurion, South Africa, noticed what appeared to be a bright new spot, a presumed storm, on Jupiter, just below and to the right of the Great Red Spot. Two days later, NASA’s Juno spacecraft carried out its 27th close flyby of the giant planet, capturing a sharp view of the new storm, informally dubbed “Clyde’s Spot.” According to NASA, the feature is a plume of material erupting above Jupiter’s top-most cloud layers, a convective outbreak like others occasionally seen in the South Temperate Belt. Citizen-scientist Kevin M. Gill created this image of Jupiter, the Great Red Spot and Clyde’s Spot combining five Juno images taken on 2 June when the spacecraft was between 45,000 kilometres (28,000 miles) and 95,000 kilometres (59,000 miles) above Jupiter’s cloud tops.