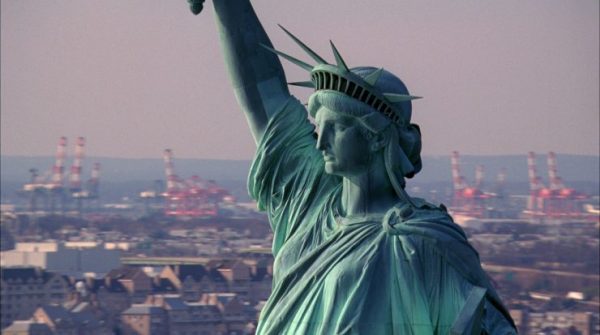 Steve McQueen turns his searing vision to America in the 20th Century. Here’s more on his epoch-making exhibition at the Tate Modern from Arts.Black:

Steve McQueen’s seven-minute, ironically titled Static (2009) is the first of fourteen works I encounter in his exhibition at the Tate Modern. On the screen hovering before me, in the Museum’s unlit gallery, I observe shaky close-ups of a certain world-renowned copper statue. I often see this statue framed within postcard-like images on Facebook, or counterposed to a moody sunset in the entry credits of a sexy sitcom; or set as the unbelievable object of destruction in a Marvel Universe storyline. This statue, the Statue of Liberty, signifies in excess of its mere physical form as an ideological expression of 19th-century modernity — a mish-mash of scientific rationalism and classical liberalism mixed in with a heavy dose of industrial capitalism. Lady Liberty, in all her oxidized splendor, is disturbed from assuming her still, graceful comportment, as she continuously shifts about in the frame, thanks to the camera’s quivering movement. It’s clear we’re circling around the statue, and from an elevated height: the sound of the helicopter blades, which fades in and out, produce felt vibrations, dizzily moving about the device that, in turn, makes images move. Beyond the immediate object of attention is a horizon, filled with other objects that symbolize Man’s conquest over nature — skyscrapers, cranes, shipping docks — piercing into a violet-hued sky.