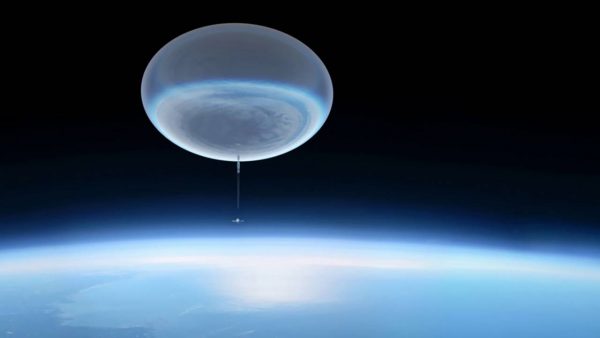 ASTHROS (Astrophysics Stratospheric Telescope for High Spectral Resolution Observations) is a football sized ballon that will carry a gondola of instruments to study the area of space near our own planet. Here’s more from NASA’s Jet Propulsion Laboratory:

While balloons might seem like antiquated technology, they offer NASA unique advantages over ground- or space-based missions. NASA’s Scientific Balloon Program has been operating for 30 years at Wallops Flight Facility in Virginia. It launches 10 to 15 missions a year from locations around the globe in support of experiments across all of NASA’s science disciplines, as well as for technology development and education purposes. Balloon missions don’t only have lower costs compared to space missions, they also have shorter times between early planning and deployment, which means they can accept the higher risks associated with using new or state-of-the-art technologies that haven’t yet flown in space. These risks may come in the form of unknown technical or operational challenges that can impact a mission’s science output. By working through these challenges, balloon missions can set the stage for future missions to reap the benefits of these new technologies.

“Balloon missions like ASTHROS are higher-risk than space missions but yield high-rewards at modest cost,” said JPL engineer Jose Siles, project manager for ASTHROS. “With ASTHROS, we’re aiming to do astrophysics observations that have never been attempted before. The mission will pave the way for future space missions by testing new technologies and providing training for the next generation of engineers and scientists.”