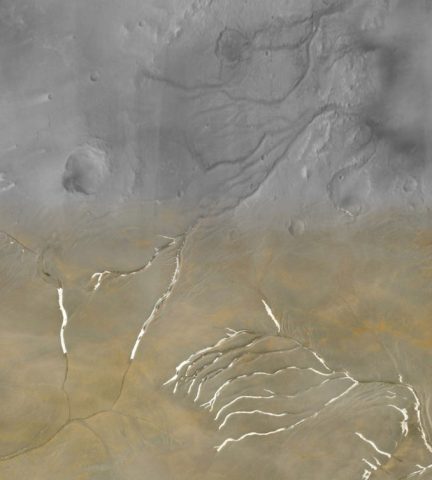 All the way up to the 20th Century, many believed that were canals on Mars. Here’s some of the history, from NASA:

In the 1800s, observatories with larger and larger telescopes were built around the world. In 1877, Giovanni Virginio Schiaparelli (1835-1910), director of the Brera Observatory in Milan, began mapping and naming areas on Mars. He named the Martian “seas” and “continents” (dark and light areas) with names from historic and mythological sources. He saw channels on Mars and called them “canali.” Canali means channels, but it was mistranslated into “canals” implying intelligent life on Mars. Because of the then recent completion of the Suez Canal in 1869 (the engineering wonder of the era), the misinterpretation was taken to mean that large-scale artificial structures had been discovered on Mars. The importance of canals for worldwide commerce at that time without a doubt influenced the popular interest in “canals” on Mars….. Most experienced astronomers never saw the Martian “canals” and for a good reason. We now know that they never existed! The network of crisscrossing lines covering the surface of Mars was only a product of the human tendency to see patterns, even when patterns do not exist. When looking at a faint group of dark smudges, the eye tends to connect them with straight lines. This has been demonstrated by many laboratory and field experiments.

While there were never canals on Mars, there are many valley networks that scar the surface of Mars. At times it has been thought that the valleys were created by rivers — but now that idea is being questioned. Here’s more from Astronomy Now:

“For the last 40 years, since Mars’s valleys were first discovered, the assumption was that rivers once flowed on Mars, eroding and forming all of these valleys,” said Grau Galofre.

“But there are hundreds of valleys on Mars and they look very different from each other. If you look at Earth from a satellite you see a lot of valleys: some of them made by rivers, some made by glaciers, some made by other processes, and each type has a distinctive shape. Mars is similar, in that valleys look very different from each other, suggesting that many processes were at play to carve them.”

Comments Off on Sub-Glacial Melting May Explain Martian Channels #SpaceSunday