Designing a Grimy Future by Necessity and Happenstance #cyberpunk 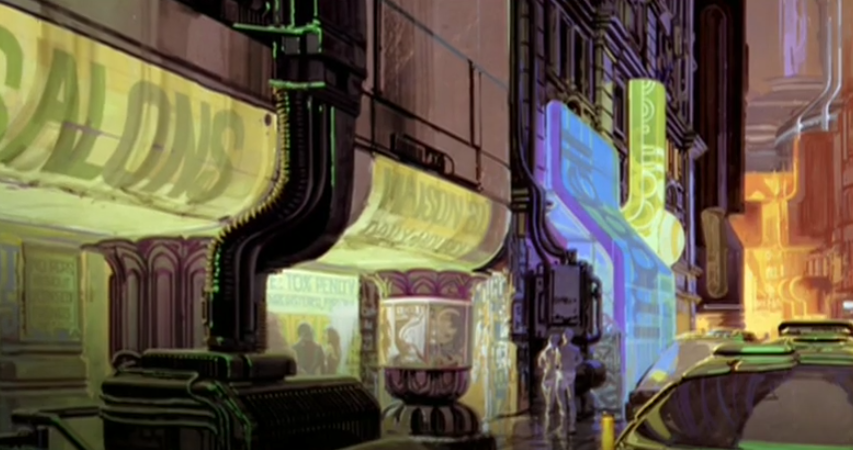 I just re-watched this making-of short doc that came with the DVD release of Blade Runner. There is a lot of great info here that I’d forgotten about.

Among many other things, they talk about the origins of the film’s grimy, dense urban landscape, with buildings covered in piping, wires, conduit, signage, and lots of neon — details that became a hallmark of most cyberpunk to follow. Turns out, s lot of that aesthetic was borne of necessity and happenstance.

Given the ambition of what they were trying to achieve, the budget for Blade Runner was tight on many fronts. They were relegated to using the existing streets of the Warner Bros. studio lot in Burbank for their outdoor sets. They had to retrofit all of the existing buildings to make them look suitably 21st century. Besides adding futuristic facades to some, they soon realized that it was cheaper and quicker to just attach a ton of hosing, tubes, pipes, wires, and other geegaws to the old buildings to really drive home the idea of William Gibson would later summarize as “the street finds its own uses for things.” Cyberpunk is street tech!

In the midst of all that, the filming was delayed by the 1980 screen actors strike, so the set decorators had way more time than usual to design and dress the sets (filming finally began in the spring of 1981). So, given the extra time, they just kept layering on the retro-fitted greeble and weathering the hell out of it.

And thus, a thousand grimy cyberpunk futures were born.