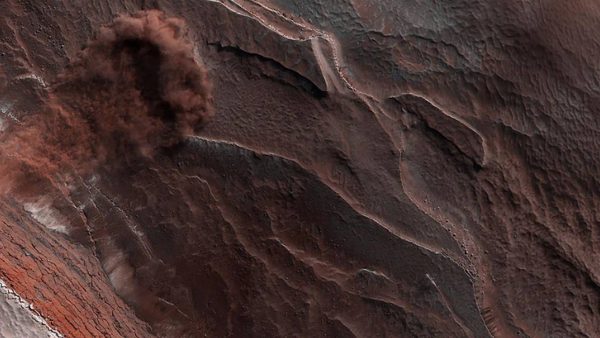 One of NASA’s oldest spacecraft, the Mars Reconnaissance Orbiter, has given us images of an avalanche-like event on Mars. Here’s more from SlashGear:

The MRO is one of the oldest spacecraft NASA has operating at Mars; unlike the rovers, which are on the surface, the Mars Reconnaissance Orbiter is orbiting the planet, peering downward with multiple camera tools to observe the atmosphere, landscape, and phenomena that occur on it. MRO has provided us with many stunning images, including one of a dust devil snaking across the surface.

NASA has highlighted another image from MRO, one that features a dark, dusty avalanche. Though the avalanche was caused by ice breaking free and tumbling down, the planet’s surface is quite dusty and a huge amount of that dust was kicked up by the falling ice, causing what appears to be a rolling dust plume on the rocky Martian land.

Comments Off on NASA Photographs a Martian Avalanche