Anyone who follows cyberpunk is aware of the frustrating fact that William Gibson’s masterpiece Neuromancer has yet to be made into a film. We got Johnny Mnemonic instead and it… wasn’t terrible?

You’ll be forgiven for not knowing that there’s another Gibson short story that was also made into a movie. Based on the 1984 “New Rose Hotel” story, which originally appeared in Omni magazine, the 1998 Abel Ferrara film of the same name came and went, pursued by a fusillade of rotten tomatoes. I’d actually forgotten it even existed until Gibson himself mentioned it on Twitter a few days ago.

Finding it available on Amazon Prime, I re-watched it. And found a lot in it to like, rotten tomatoes notwithstanding. First of all, the principal cast is wonderful: Christopher Walken, Willem Dafoe, and Asia Argento. There are also fun, brief cameos by John Lurie (of Lounge Lizards fame), Annabella Sciorra, Gretchen Mol, and actor and pioneering electronic musician, Ryuichi Sakamoto (Merry Christmas, Mr. Lawrence and Yello Magic Orchestra).

The film follows the details of story religiously, although in the original, everything is experienced in memories/flashbacks as the main character awaits his likely cruel fate while hiding from assassins in a capsule hotel at the Narita Airport in Japan. In the film, we see everything that leads up to this final moment played out.

New Rose Hotel takes places within the same universe as Neuromancer, the other Sprawl novels, and the rest of the Burning Chrome short story collection (which includes this story). Walken and Dafoe play “Fox” and “X,” two “soldiers in the Skull Wars.” They are corporate extraction men/kidnappers. In the story’s near future, giant megacorporations (zaibatsus) pay ungodly amounts of money to acquire the brains of genius scientists and engineers. They give these people every luxury and indulgence they desire. They can do anything and everything. Except defect. Try to leave and go to another company and you’ll likely wind up falling from a balcony. Walken’s Fox has set his sights on a scientist who works for one zaibatsu and manages to convince another to pay him (and X) one hundred million dollars if he can deliver the scientist. The plan is to use a young prostitute (Argento) to seduce the scientist and get him to switch sides. Everything seems to go like clockwork until the double-crossing starts. 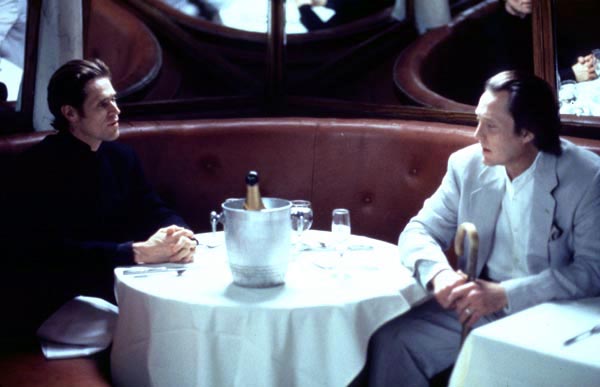 Like the short story, this is a film about the loss of meaning, the loss of feeling, and a world that no longer makes any sense. The mood of the film certainly delivers on that opiated emptiness and ennui in spades. As Fox tells Argento’s Sandi at one point: “You’re already dead, you’re just not lying down yet.” This applies to every character in the film. Sadly, it also ultimately neatly critiques the film itself.

The highly volatile and eccentric Abel Ferrara seemed to let this one get away from him. He fired much of the crew during it, and in a weird parallel to the characters in the film, there was a love triangle during shooting between Dafoe, Argento, and Ferrara. The off-camera messiness didn’t seem to do the messiness of the story any great favors.

So, for cyberpunk completests, and if you want to see one of the precious-few Gibson properties translated for the big screen, New Rose Hotel is worth a look. If nothing else, the Palm Pilot being used as a “Cray microcomputer” that receives grainy video and text messages (with animated emoticons!) is worth the price of your ticket.