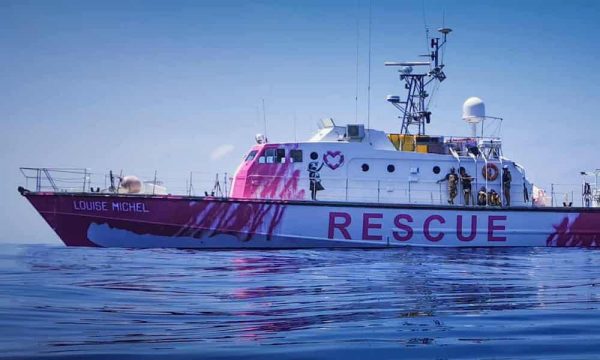 Banksy’s art has always been explicitly, and sometimes aggressively political. But since nobody knows for sure who’s lurking behind the Banksy mask, it’s hard to know just what direct political action the artist (or artists) have taken. But here’s an act from Banksy that could have real impact on the lives of some of the some vulnerable folks. Here’s more from JUXTAPOZ:

The illusive artist has funded a refugee boat operating in the Mediterranean Sea,  and according to the Guardian, the bright pink motor yacht was launched on August 18 to rescue refugees “attempting to reach Europe from North Africa.” The boat, named Louise Michel after a French feminist anarchist, orginally set sail from Burriana seaport near Valencia, Spain, and is now in the central Mediterranean where, according to the Guardian report again, “on Thursday it rescued 89 people in distress, including 14 women and four children. It is now looking for a safe seaport to disembark the passengers or to transfer them to a European coastguard vessel.”