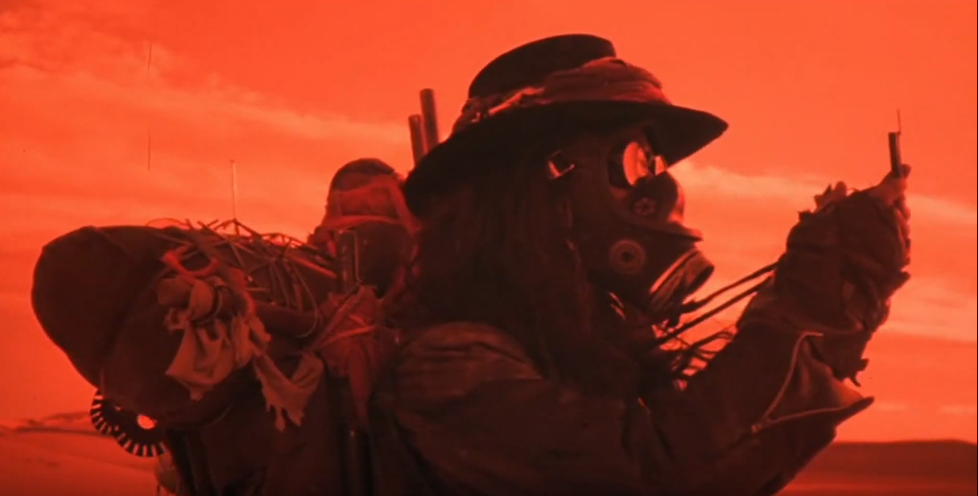 South African director Stanley had gotten his start directing gothic/industrial music videos for bands like Fields of the Nephilim and Pop Will Eat Itself. That sensibility carried over into Hardware. The film feels a lot like an extended industrial video, was inspired in part by that genre of music, along with bands like Psychic TV, and features cameo appearances by Carl McCoy (Fields of the Nephilim), Iggy Pop, and Lemmy of Motörhead.

Hardware takes place in an irradiated near future. Jill (Stacey Travis) is a machine artist (think Survival Research Labs). Her boyfriend gifts her a robot head that a Nomad scavenger (McCoy) found in the wastelands. She starts turning it into art not knowing that it was part of a secret military project gone awry. It is actually a self-assembling killer robot. As she sleeps, it awakens, self-assembles with the junk in her studio, and the meatbot massacre begins.

Probably due to its unexpected box office success ($5.7 million), Hardware got into legal hot water for purloining the plot for the film from the 2000AD comic, SHOK! The publishers of the comic won the suit and a credit was later edited into the film. The film also cribbed heavily from previous films like Aliens, Terminator, Predator, Damnation Alley, and Saturn 3. It’s not really the plot of Hardware that makes it such a cult classic, it’s the clever way in which Stanley pulled off such an immersive, feature-rich world on such a small budget. It would go on to inspire generations of no-budget film makers.

Hardware’s killer robot, M.A.R.K. 13, and Jill, the artist who builds mechanized sculptures, are obviously heavily “inspired” by Mark Pauline and Survival Research Labs. SRL videos even appear on Jill’s TV in the film and Stanley didn’t bother to get permission to include them. The band GWAR also appears on Jill’s TV and one imagines that they didn’t grant permission, either.

In many ways Hardware itself is a self-assembling film, using bits and pieces from other novels, films, comics, and music. The costumes in the film were even scavenged from a theater production company and much of the hardware used was raided from aviation scrapyards. When asked about this, Stanley chalked up all of the promiscuous borrowing and stealing to the film’s punk rock ethos.

In the above In Defence Of video, they make the compelling case that Cassidy, the Irish vampire in Garth Ennis’ The Preacher, bears an uncanny resemblance to the Shades character (played by Irish actor, John Lynch) in Hardware. So, the punk-rock plagiarism apparently got paid forward.