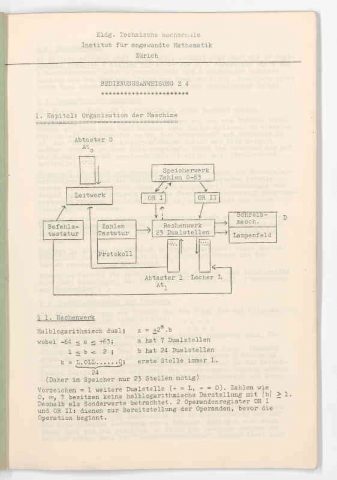 The Zuse Z4 is the size of a room, runs on magnetic tapes, and can only be run by a team. It’s on display at the Deutsches Museum in Munich, and just recently its manual has been rediscovered, and many of the mysteries of what is considered to be first digital computer has been revealed. Here’s more from Communications of the ACM:

Handwritten documents dated October 27, 1953, also came to light, concerning arithmetical problems that were solved with the Z4. The headings “Table of Air Force Coefficients” and “Wings with Ailerons” indicate that these are flutter calculations. With the P-16, a calculation time of 50 hours was necessary for 2.4 seconds flight time. Urs Hochstrasser, Hans Rudolf Schwarz,and Heinz Waldburger were involved. As Schwarz told me on January 12, 2016, this work was top secret at the time. After the Z4 was returned to Zuse KG, the calculations were continued with the Ermeth vacuum tube computer developed at ETH.