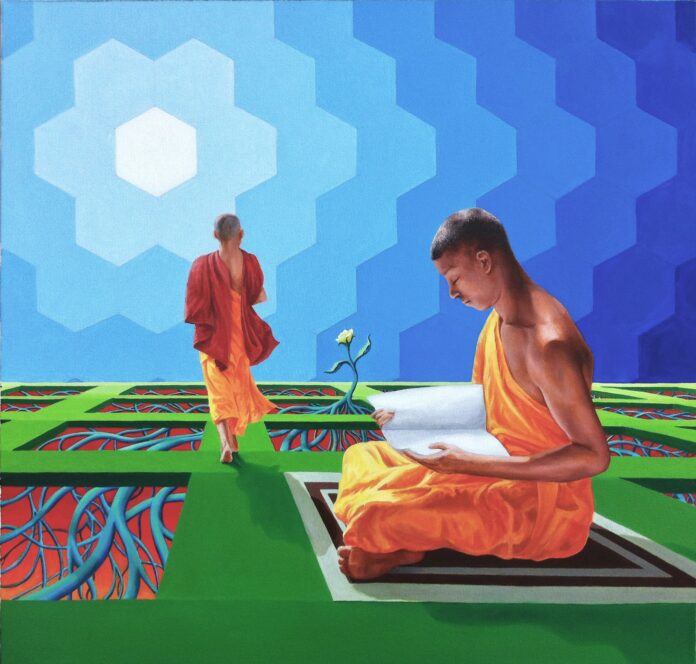 Today we celebrate Jorge Larrea and José Camacho who create vibrant works of art that incorporate nods to the rich history of their culture. Their artwork is featured in this article from Montclair Local

José Camacho’s work has a narrative that relates to his ethnic background and his heritage. He left Puerto Rico when he was 19. He studied at Montclair State University.

For the past few years he has been working on different canvases of plantains, or canvases made of words taken from Puerto Rican literature and music.

He also bases some of his work around the elements of alchemy: fire, earth, air, water and ether. One of the paintings of the plantains is called “Ghost”; it is the one based on ether.

Unlike Larrea, he does not work as much in bright colors.

His art is always in dialogue with Puerto Rican art, as much as with American art, he said.

The island has a simple history in the arts, Camacho said. “Right now, Puerto Rico is actually opening up in the international market of the arts, with a lot of artists now venturing into galleries in New York,” he said. There is a strong culture of silk screens and printmaking.

Larrea’s work is esoteric, and Camacho’s is as well.

It’s interesting how law, history and esoteric thinking work together, he said.

There might be something about being a Spanish-speaking immigrant that is conducive to esoteric subjects, he said.

“There is a strong heritage in our indigenous backgrounds, and that’s part of the whole mysticism,” Camacho said.

One painting says “Ay bendito” over and over again, a phrase that Puerto Rican people will say to express sympathy, or anger, or other things, depending on how it’s said.

Another canvas reads “Estos trópicos tristes,” or “This sad tropics.”