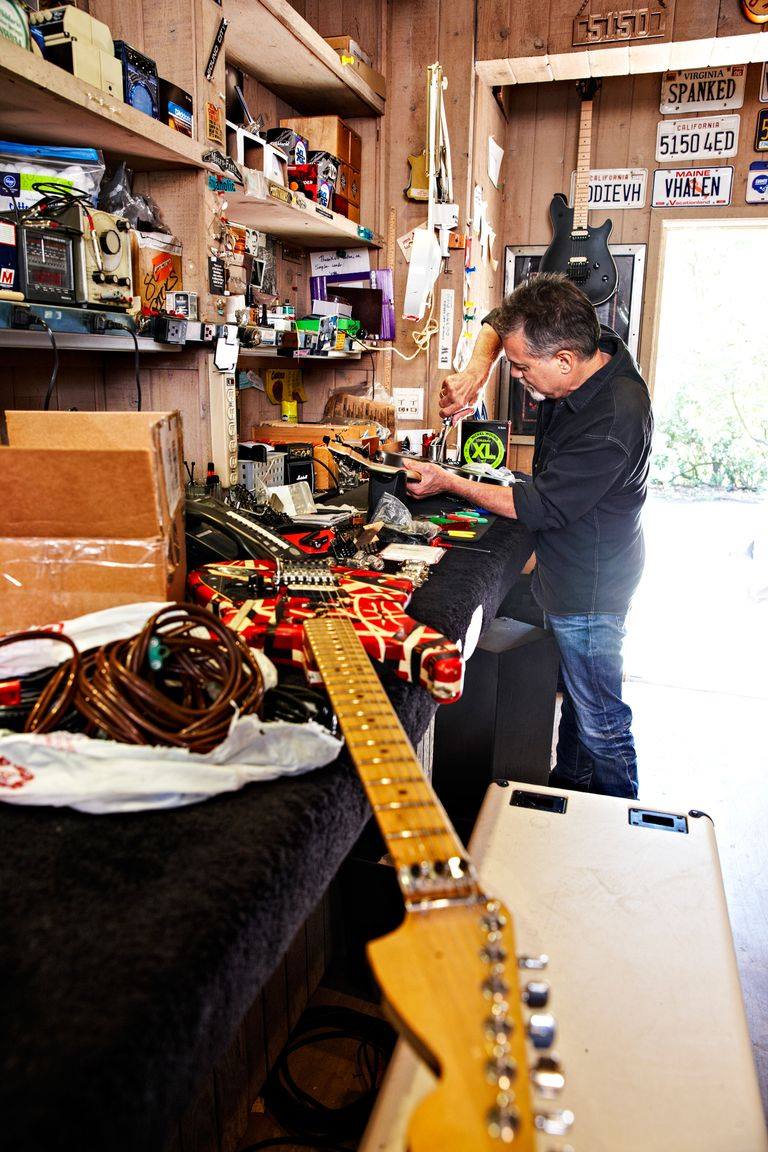 I posted a piece on Boing Boing this morning I thought was too good not to share here. It turns out that Eddie Van Halen was not only one of the most amazing guitar players to every dance with the Devil in the pale moonlight, he helped get his unique sound by altering the guitars and amps that he used.

Popular Mechanics interviewed him in 2015 and they reprinted the interview upon Van Halen’s passing last week:

My playing style really grew from the fact that I couldn’t afford a distortion pedal. I had to try to squeeze those sounds out of my guitar. The first real work I did was in my bedroom. I added pickups, because I didn’t like the sound of the originals.

Most guitar necks are too round on the back, so I took sandpaper and reshaped the neck to be very flat. I actually refretted a few guitars early on because I wanted to shave the fingerboard down and make the neck even flatter. The flatter it was, the farther I could bend a string without fretting out, or choking the sound when the string hits a fret higher on the neck.

My first real guitar was a Les Paul Goldtop. I was a total Eric Clapton freak, and I saw old pictures of him playing a Les Paul. Except his had humbucking pickups, and mine had the soapbar, P-90 single coils. The first thing I did with that guitar was chisel it out in the back and put a humbucker in. When we were playing gigs, people kept saying, “How is he getting that sound out of single—coil soapbar pickups?” Since my hand was covering the humbucker, they never realized that I’d put it in.

“What drives me to tear things apart is,” he says, “some of it is necessity, some of it is just experimenting. I’m always pushing things past where they are supposed to be.” He explained that some of what he did, he had to do because he couldn’t afford some of the equipment that others had.

He goes on to explain how he liked the vibrato bar of a Fender guitar and the humbucking pickups of a Gibson guitar, and he wanted both in the same guitar. He liked the “much fatter sound” Gibson’s pickups, which cancelled out some of the hum caused by the vibrato bar. So, he mashed them together, buying a knockoff Fender body — a second, and then ripping the pickups out of Gibson guitar. He describes using a hammer and chisel to make a hole in body for the Gibson pickup. “I screwed the pickup straight into the wood,” he said, mentioning that the Gibson Stratocaster has three pickups. “I routed out the body and crammed (in) the humbucking pickup. Mind you, everything was just lying there, unsoldered.” He struggled to figure out how to connect three pickups to two knobs. “How am I going to hook this back up? I had no clue.”