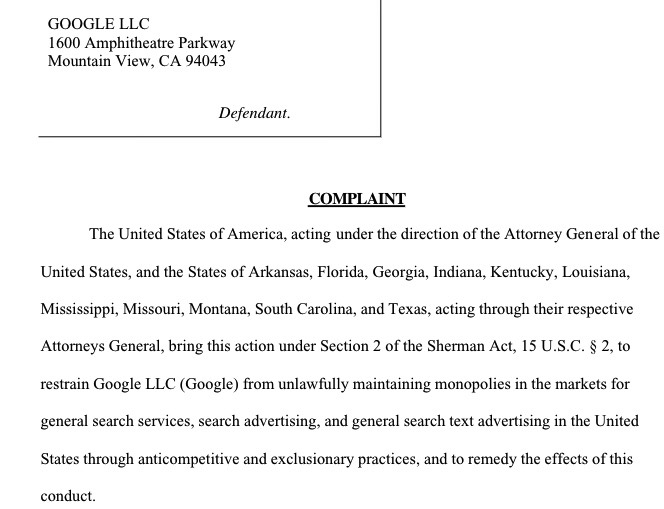 “Google has thus foreclosed competition for internet search. … Google is so dominant that ‘Google’ is not only a noun to identify the company and the Google search engine but also a verb that means to search the internet.”

Google tweeted back right away… 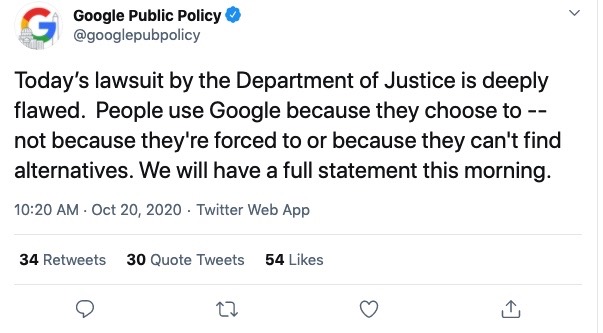 “Today’s lawsuit by the Department of Justice is deeply flawed. People use Google because they choose to — not because they’re forced to or because they can’t find alternatives. We will have a full statement this morning.”

It took 22 years for Microsoft to get an antitrust suit, and the same seems true for Google.

Our experience with Google for things like search and shopping over the years has been “ok”… the search results are not that good anymore with ads taking over search so users cannot find search results quickly.

We’ve had some specific instances of Google doing some things that do not represent most people who work there or the company in general, but they still happened.

A Google recruiter impersonated our founder’s email (Limor Fried) and applied for a job as Limor. After catching them do this, it eventually went to their leadership council at the time (Amy Lambert, Google’s senior employment counsel). In the end, we were told we should be glad Google wanted to hire Limor. We asked what the data retention policy for something like this, Google said they did not have any policy.

Google removed our founder’s account on the Google social network at the time (Google+) numerous times for “violating Google’s Community Standards”.. it was because she used her real name and nickname “Ladyada” – Google it was assumed to be fake, even after verifying numerous times with IDs and more. Because so many things were connected to Limor’s Google account, she was locked out. It was resolved, we asked at the time what the data retention policy for the scanned IDs, we did not get a reply.

A Google employee turned off our Google Ads bypassing the logging, history, and without leaving any records, we were told it was a human error due to the ads performing too well at the time. We were credited with a small amount, but not the amount the ads/conversions would have taken during that time. We asked for a data log of all the interactions on the account. Google said they would not disclose to us what human changes were made that were not in the records to us.

Google (YouTube) met with us and said to change to our video content to be “more like PewDiePie” so the “algorithm will promote them” (and more of their advertisers will spend on them), and that there was not enough interest in “women in tech” or “STEM”, but there is a lot of interest in makeup videos and we should do some of those.

Google’s statement today so far is “People use Google because they choose to”… we could not function as a business without having a presence on Google, via organic or paid search/shopping. There is no choice for us and many others. Long term, the antitrust suit against Microsoft made the company better, more innovation occurred, and more options are available to people.

Comments Off on DOJ antitrust suit against Google filed