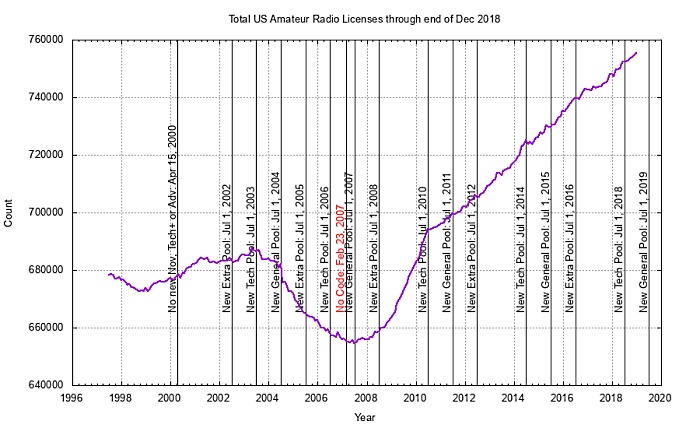 K0LWC posts a lament that is common in the HAM community – that the numbers are dwindling. But the evidence says otherwise.

Data from the ARRL shows that ham radio licensees are increasing. When you look at the chart above, you see two significant markers that are likely driving this growth.

The Morse code requirement was always an intimidating part of obtaining your General FCC license. Learning Morse code is like learning a second language. It takes time and effort to learn, and that’s not a bad thing. However, it doesn’t change that it scared many people away from the hobby. When the FCC removed this requirement in 2007, I believe it opened the door for many who spent years on the fence. Then you have the economic downturn of 2008. What does that have to do with ham radio? A lot.

After the economic downturn, the United States watched as survivalism, now commonly calling “prepping,” entered mainstream culture. People were worried as the country was involved in multiple wars and our economy was on the brink of collapse. Citizens stocked up on food storage, water, firearms, and…communications equipment. As our country spiraled into more turmoil ham radio licenses steadily increased to more than 750,000 by the end of 2019.

Comments Off on Ham radio is not dying, it’s evolving #HAMradio