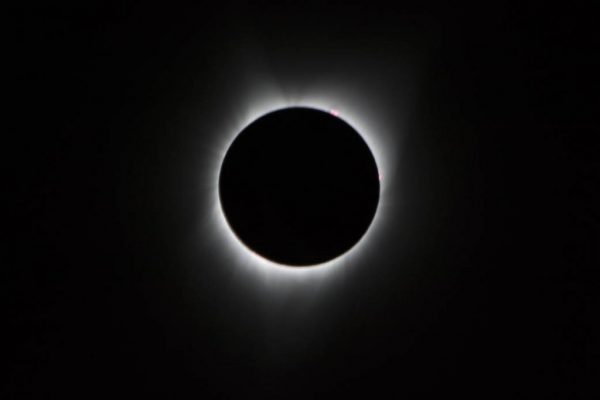 The second of the 2020 eclipses happens on December 14th, visible in South America. Folks across Chile and Argentina will be able to see the eclipse, as they’ll be in the (excellently named) path of totality. The eclipse will also be able to be seen in Antarctica and South Africa. Here’s more from NASA:

Total eclipses are of particular interest to solar scientists, because with the Moon blocking the bright light of the Sun, you can see the Sun’s atmosphere from the ground.  Solar scientists at Marshall Space Flight Center, and around NASA, make use of telescopes called coronagraphs that block the Sun so they can see the dim atmosphere, the corona, around it. But — given how perfectly the Moon lines up with the Sun — you can see the atmosphere closer to the surface of the Sun than we even can with our telescopes in space.

The shadow of the Moon on a planet during an eclipse can be described using three terms: umbra, antumbra and penumbra. The umbra is the shadow that is cast when the Moon completely covers the Sun and is where the path of totality falls. If the Moon is further away from the Earth, it is unable to block the Sun entirely. The Sun appears as a ring of light around the Moon. In this case, the shadow is known as the antumbra, or path of annularity, and occurs during an annular eclipse. Similarly, a partial solar eclipse can be observed when only a portion of the Moon blocks the Sun and creates a shadow referred to as the penumbra. The penumbra also occurs surrounding the umbra during a total eclipse, effectively covering those regions on the planet that only have a view of a partial eclipse.