Playing Cyberpunk on the Tabletop #cyberpunk

At this point, in this series, we’ve talked about well-known cyberpunk tabletop RPGs, like Cyberpunk Red and GURPS Cyberpunk, and c-punk videogames, like Cyberpunk 2077, but there are also cyberpunk card games (like the wonderful Netrunner), board games, and miniatures skirmish games.

In this piece on Wargamer.com, my pal Tim Linward looks at several skirmish and board games and a new tabletop RPG, Reality’s Edge.

Infinity might be the only wargame where a ninja can decloak from thermoptic camouflage behind a power-armoured HMG gunner, try to shank them through the spine with a nano-edge katana, only to be stopped when a speeding animatronic koala obliterates them with an explosive, self-destructive hug. Don’t let the anarchy mislead you – Infinity is a deep and very detailed game. 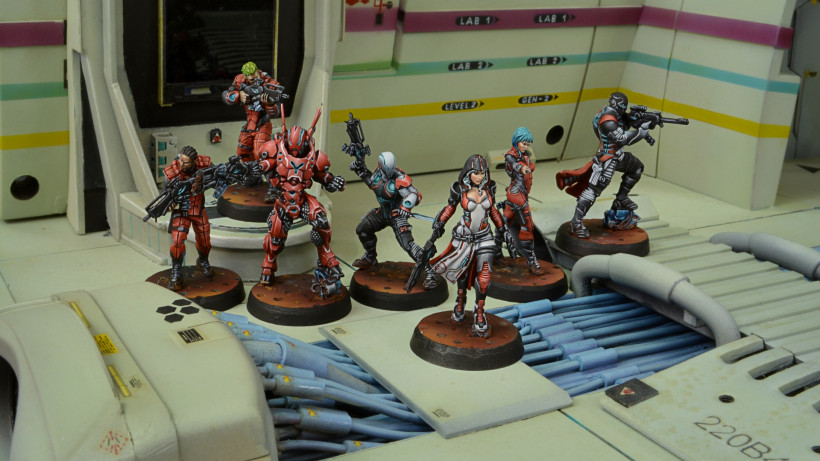 Players control spec-ops teams from across human space, fighting knife-point engagements over intel, power, and influence. You’ll alternate between taking the ‘active’ turn, in which you spend orders from a limited pool to activate your troops, and ‘reactive’, in which you can respond to your opponent’s actions. Everything the opposing force does while in your troops’ line of site can be responded to with cunning or firepower, resulting in an intense and constantly engaging game. With the right skills or equipment your forces can hack drones, mechs and objectives, impersonate enemy troops, launch ambush attacks from camouflage, resuscitate fallen allies, or blow up rival hackers’ brains with feedback.

The result is surprisingly believable paramilitary skirmish combat with ladles of cyberpunk gravy on top. Main force pinned down by a sniper nest? Send out your heavy infantry and let the bullets plink off your armor while you hose them with machine gun fire. Enemy mecha rampaging through your lines? Throw a repeater device onto the wall beside it and let your hacker, hidden safely in a locked building, cyber-attack it; then while the pilot wrestles with locked controls bring up an adhesive launcher and cover the mech in instant-setting cement foam. Some troops are so well camouflaged you don’t even deploy their model to the board – you write down or photograph their “actual” location until you reveal them. Even these can be sniffed out with the right tech. It’s a high-tech game of rock-paper-scissors-lizard-Spock.

Read the rest on Wargamer.com

Comments Off on Playing Cyberpunk on the Tabletop #cyberpunk