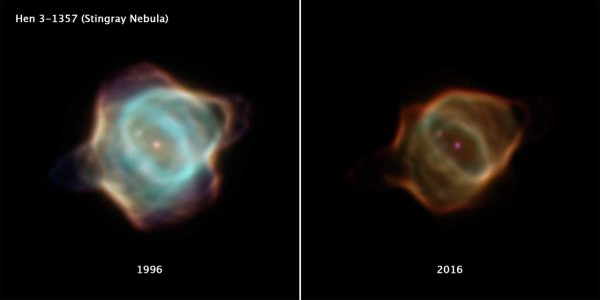 Even as it fades, the Stingray Nebula is a sight to behold. The Hubble telescope has recently captured the beauty of a nebula as it fades out of existence. Here’s more from SlashGear:

In the image above, the nebula is seen as very bright in 1996, and the second image from 2016 shows how, in a decade, the nebula faded significantly. Researchers say that witnessing such a fast change in a planetary nebula is exceedingly rare. NASA scientists note that the two images show the nebula drastically dimmed in brightness and has changed shape. The bright blue tendrils of gas toward the center of the nebula seen in 1996 are all but gone.

In 1996 the wavy edges earned the nebula its name; by 2016, they were almost nonexistent. Researchers have found significant changes in the light emitted by the glowing nitrogen, hydrogen, and oxygen being blasted away from the dying star at the center of the nebula. Significant changes were particularly noted in oxygen emissions, which dropped in brightness by a factor of nearly 1000 between 1996 and 2016.