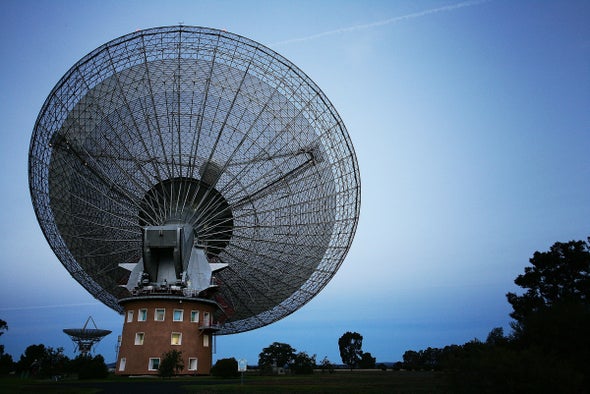 Astronomers are investigating a radio wave emission that appears to have come from the direction of Proxima Centauri, Via Scientific American

It’s never aliens, until it is. Today, news leaked in the British newspaper The Guardian of a mysterious signal coming from the closest star to our own, Proxima Centauri, a star too dim to see from Earth with the naked eye that is nevertheless a cosmic stone’s throw away at just 4.2 light-years. Found this autumn in archival data gathered last year, the signal appears to emanate from the direction of our neighboring star and cannot yet be dismissed as Earth-based interference, raising the very faint prospect that it is a transmission from some form of advanced extraterrestrial intelligence (ETI)—a so-called “technosignature.” Now, speaking to Scientific American, the scientists behind the discovery caution there is still much work to be done, but admit the interest is justified. “It has some particular properties that caused it to pass many of our checks, and we cannot yet explain it,” says Andrew Siemion from the University of California, Berkeley.

Most curiously, it occupies a very narrow band of the radio spectrum: 982 megahertz, specifically, which is a region typically bereft of transmissions from human-made satellites and spacecraft. “We don’t know of any natural way to compress electromagnetic energy into a single bin in frequency” such as this one, Siemion says. Perhaps, he says, some as-yet-unknown exotic quirk of plasma physics could be a natural explanation for the tantalizingly concentrated radio waves. But “for the moment, the only source that we know of is technological.”

The detection was made by a $100 million project called Breakthrough Listen, led by Siemion and funded by tech billionaire Yuri Milner under the umbrella of Milner’s Breakthrough Initiatives. The goal of this multiyear endeavor—which began in 2015 with a star-studded announcement attended by Stephen Hawking and other space-science luminaries—is to buy observing time on radio telescopes around the world to search the skies for evidence of technological civilizations. That pursuit, of course, is more commonly known as the Search for Extraterrestrial Intelligence (SETI). To date, no such evidence has conclusively been found despite more than a half century of modest-but-steady SETI activity, with any potential signals almost always ruled out as originating from satellites orbiting Earth or other human-caused interference.