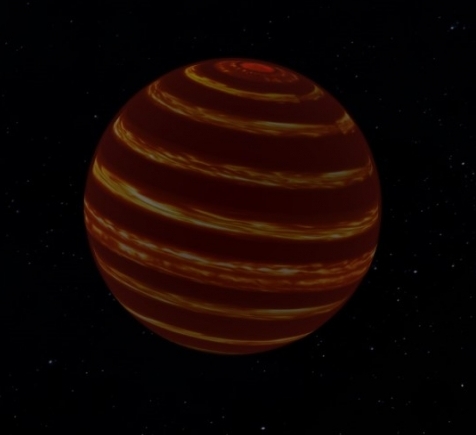 A brown dwarf is a type of substellar object that falls between the most massive gas giant planets and the least massive stars in terms of mass. Our closest brown dwarf, Luhman 16 AB. Just don’t call it a “failed star,” that’s not nice. Here’s more from Centauri Dreams:

Unlike main sequence stars, brown dwarfs do not acquire enough mass to trigger sustained nuclear fusion of ordinary hydrogen  into helium in their cores. For this reason brown dwarfs are sometimes referred to as failed stars. They are, however, thought to fuse deuterium, and to fuse lithium if their mass is > 65 MJ. The minimum mass required to trigger sustained hydrogen-burning forms the upper limit of the definition currently used by the International Astronomical Union, while the deuterium-burning minimum mass of ~13 MJ forms the lower limit of the class, below which lie the planets.

Luhman 16 AB is the subject of a new paper from Daniel Apai (University of Arizona / Lunar and Planetary Laboratory). Apai’s team was intent on finding out what brown dwarfs look like, wondering whether they’d be marked by the kind of well-defined banding and belts we see on Jupiter or roiling with storms of the kind we’ve seen (thanks to Juno) on Jupiter’s poles. The method: Using data from TESS (Transiting Exoplanet Survey Satellite), the researchers deployed in-house algorithms to measure brightness changes of the two brown dwarfs as they rotated. Brighter atmospheric features rotate in and out of view.

Comments Off on Our Closest Brown Dwarf #SpaceSaturday