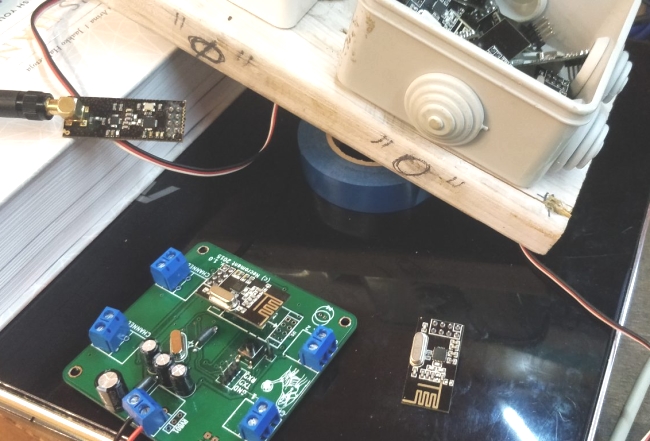 The nRF24L01+ can be very optimized or even if the silicon isn’t fake, it may have some ‘magic finger’ problems. By the end of holidays in Russia, a fresh batch of nRF24L01+ modules arrived to my joy. And to my frustration, none of them worked out of the box.

While I was waiting, I managed to get SI24R01-like COB fakes play nicely with my current setup, by patching ugly mysensors. What was wrong with those ones? It turned out to be that very same ‘magic finger’ problem. But this time so severe – that none of the modules worked with mysensors, though they flashed via my rf24boot bootloader with no issue. So, what was the problem?

The pitfall was the radio speed. For bootloading I use 2Mbps, to get things done faster. For mysensors network, I use 250Kbps for better range. Turns out that 250Kbps speed is most sensitive to how the antenna is designed. And the modules I received this time were totally screwed. Adding a 1pF capacitor helped a little, but they were still underperforming and losing packets. Touching the antenna still helped a little, but picking the right capacitor required some precise measurements. 2.4Ghz spectrum analyzer? Well, I ain’t Elon Musk with a few millions $$$ at his disposal. Perhaps, I can make some cheaper testing rig? Or perhaps it has been done before?

My guess was that the modules from the same batch will all require the same value capacitor for proper operation. That was true for leftover modules from the previous batches that required the biggest 2.2pF capacitors but worked with no issues afterwards.

The weird COB chips from this post to my surprise worked with no issues and needed no capacitors on the antenna for proper operation.

But the last batch I received was complete trash, despite being compatible with the genuine chips. The capacitance I had to add for proper operation was varying from 1pF to 1.8pF and each module took 2-3 iterations to fix.

The ‘okay’ modules from previous batches that had no capacitor on them worked properly even without any caps and my finger wouldn’t improve their performance. Perhaps it’s ‘builtin’ in the PCB during manufacturing?

From what it looks to me, somebody decided to save a few cents on the impedance control and the antenna part turned out to be crap.

All in all selecting a proper capacitor for the antenna got me 90-95% successful packet delivery rate. Adding a 1uF cap at the very power pins of the module further improved in to 99-100%! Epic win!

Read all the details on Necromancer’s notes

Comments Off on nRF24L01+: manually calibrating the antenna @ncrmnt