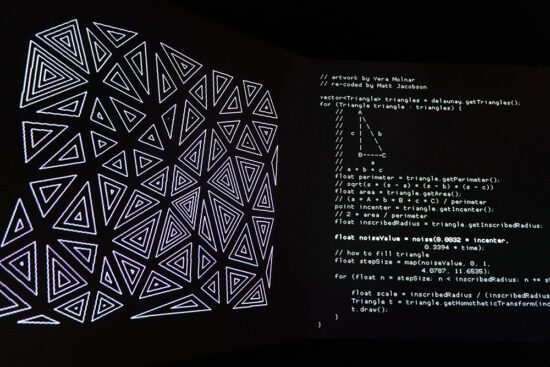 At the end of the 19th century critics debated whether or not photography can be art. Then in the first third of the 20th century there was much hand-wringing over whether or not movies can be art. You’d think folks would remember how those debates turned out when, in the late 20th century, the fancy folks furrowed their brow at the notion that video games could be art. Anyone who thinks there’s even a debate about video-games-as-art is looking the wrong direction down the 21st century. Video games, like any other medium, can produce art.

But how about coding? Here’s more from Voices in Contemporary Art:

In popular culture, programming is often depicted as lines of code flying across a hacker’s computer screen. This stereotype has led to a misconception of computer science not only as an esoteric field, bordering on the arcane, but also an uncreative one. However, Zach Lieberman is one of many artists dismantling these notions by using code as a medium to create mesmerizing animations and interactive environments. Since 2016, Lieberman has posted daily “sketches” on his Instagram (@zach.lieberman)—screen recordings of his work lasting between 15 seconds and a minute. Most of Lieberman’s sketches are created through openFrameworks, a toolkit in C++ he co-created, which programmers can download from the internet to make their own “sketches.”

Earlier in 2020, Lieberman presented “Future Sketches”, an exhibition at Artechouse DC, which utilizes creative coding—coding for artistic expression rather than for function—as a means to urge his audience to think deeper and more expansively about the possible applications of computer science.

Comments Off on Coding as Art #ArtTuesday