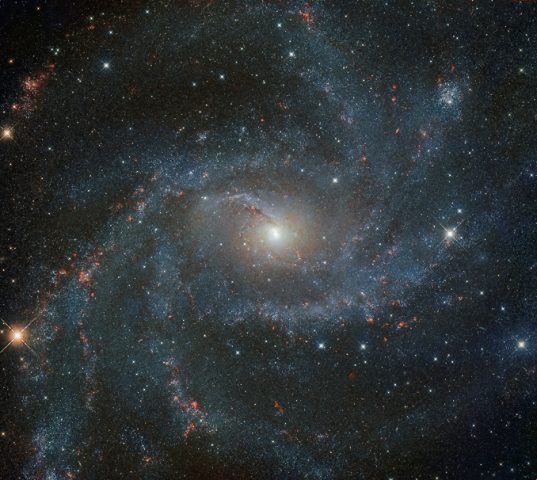 One of the greatest things about New York is the subway system. Those who live here love to complain about it, of course. But it’s a great equalizer. Central Park was intended to be a playground for Manhattanites. For 25 years Central Park fancy folks strutted around, but when the subway system opened, all of that was over. Anyone could get to Central Park. The subway opened New York up for everyone. Old technology. Equalizing technology. Oddly, that’s what we think about when we think about the Hubble Space Telescope. At this point, it’s old technology. But it still brings the universe to the people. Here’s more from Astronomy Now:

NGC 6946, a face-on intermediate spiral galaxy 25.2 million light years away, has a well-earned nickname: the Fireworks Galaxy. Over the past 50 years, 10 supernovae have been observed going off in the galaxy (also known as Caldwell 12) compared to the Milky Way’s average of one or two per century. NGC 6946 is classified as an active starburst galaxy with an exceptional rate of star formation. First observed by William Herschel in 1798, the Fireworks Galaxy can be found along the border of the constellations of Cepheus and Cygnus.

Comments Off on Hubble Delivers Again: The Fireworks Galaxy #SpaceSaturday