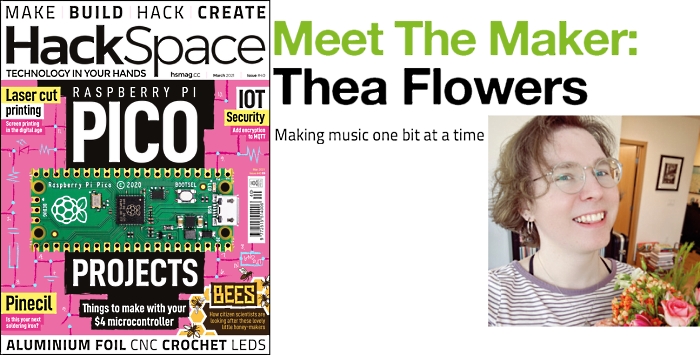 HackSpace magazine issue 40, talks to Thea Flowers, a maker who has focused on electronic synthesizers.

“The idea of building a standalone synthesiser by yourself is daunting; you have to do so much. So
I started looking for a way to build synthesisers without having to know everything out of the gate, to build a full synthesiser entirely by myself. I started to look back into the modular stuff and saw like, this is actually really awesome.

There’s so much neat stuff going on, so many unique little modules – this is perfect! I can experiment, I can play around with stuff, I can make tiny single-purpose things that don’t require me to have a PhD before I even start creating things.
“It was more about the desire to create something physical than the desire to create music. It’s the tinkering aspect – I like the idea of small single-purpose machines that work together.

“My first module is called Sol, and it’s a MIDI-to-control voltage (CV) model. In the world of modular synthesisers, everything talks to each other using CV; in the world of computers, everything talks to each other using MIDI. Sol is the bridge between the two. You can hook it up to your computer and send it MIDI notes – Sol will convert that to CV.
“What’s cool about Sol is that it’s running CircuitPython. You can change how it translates MIDI information to CV. You can make it do all kinds of neat stuff. Instead of outputting a note, you can make it output a note plus some vibrato; you can make it change the scale of the note. You can also make it play the role of smoother modules that you may not have if you’re just starting out. It can be an envelope generator, it can be a little frequency oscillator if you want it to do that. Sol is really customisable and it’s a little reprogrammable brain that can process MIDI and spit out CV.

“Big Honking Button is technically a sampler with a button on it, and when you press the button, it honks. It also runs CircuitPython, and it’s customisable, so you can make it do all kinds of cool stuff. For example, there are samples on there for doing percussion. One of my favourites that I wrote is a cycle program, so you tell it a list of samples, and every time you press the button, it will cycle through them. 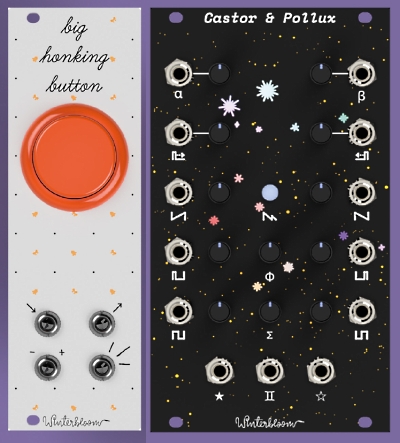 “You can’t develop a module in a vacuum, right. You can’t develop something that’s designed to work with other pieces of equipment if you have no idea what other people are going to use it for. A lot of the feedback I got from Castor & Pollux was around the controls on the front of it. I got really good feedback on tuning it; people were concerned about these little trimpots on here. Because it is a little hard to nail the exact setting on something that small. Based on that feedback, I made a little edit in software to make the tuning knobs non-linear so that the centre of the range is more spread out, so you have an easier time dialling in the note that you want. It’s little things like that, quality of life, that I get from the community.

“I’m relatively new to the hardware world. I’ve been really happy with how, over the last three years or so, PCB prototypes, and, even small-scale contract manufacturing, have become so much more accessible to people. If it weren’t for contract manufacturers willing to do small runs of things, if it weren’t for PCB services like OSH Park and others, I couldn’t even do this. It would be impossible.

“People ask me all the time, ‘how do I get into doing hardware stuff?’ And the best answer I have is: find a community. Go and seek out people who are doing things that you want to do – surround yourself with those people. Having a community is the best way you’re going to learn, and the best way you’re going to be successful. You need people to interact and learn from and share with. That is the most important thing you can do. You can not learn any of this stuff in a vacuum.

“I could not have done this without the modular synth communities I’ve been a part of, and the Adafruit community. Scott Shawcroft, the CircuitPython project lead, once spent like four hours helping me debug the first board that I had designed. He didn’t have to do that, but he did. Community is essential.”