From butterfly wings to shrimp claws: Mimicking nature on the nanoscale #Biomimicry 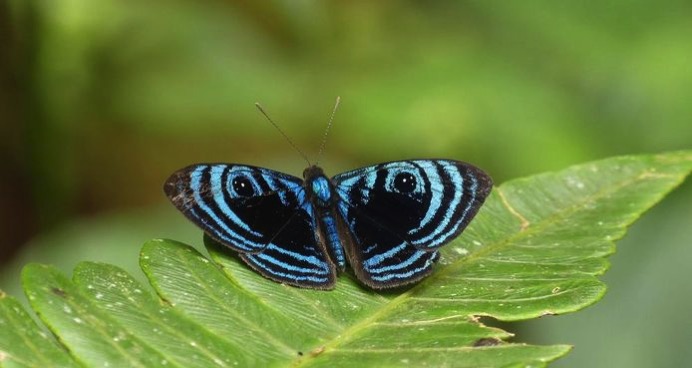 inventors have been inspired by nature for a long time, as technology improves researchers are zooming in on nature’s building blocks at the nanoscale, Via Environmental Health News

“This is what happens in butterfly wings,” the petite Shirman, lifting her voice over the roar of a lab fume hood, told EHN. “The spectrum of colors changes from the structures in the wings at the nanoscale,” that is, a scale hundreds of thousands of times smaller than the head of a pin.

Shirman, vice president of materials design at the Boston-based startup Metalmark Innovations, is referring to the concept of structural color found in nature—such as in butterfly wings, bird feathers, beetles, berries, and the sky.

In a butterfly’s wings, for example, chitin—a complex carbohydrate that forms the outer shell of arthropods, insects, crustaceans, fungi and some algae—is ordered in ways that reflect or refract the light, like tiny prisms. These same microscopic structures that bring beauty to a butterfly also provide strength, lightness, and water repellency. It’s this efficient design that has captured the imagination of Metalmark’s founders and inspired their invention: indoor air purification systems that destroy, rather than trap, volatile organic compounds, viruses, and ultrafine particles.

The iridescent specks in Shirman’s tiny vial mimic the three-dimensional, honeycombed protein structures found in the wings of a metalmark butterfly. They’re fabricated from metal oxides, such as silica or titanium, and metal nanoparticles that act as catalysts that destroy air pollutants. Metalmark applies the material as a thin coating within air purification units. The technology is more effective, more energy efficient, and less costly to maintain than comparable air purification systems, Sissi Liu, Metalmark CEO, told EHN. And a study published by Oak Ridge National Laboratory that found Metalmark’s technology performed better than commercial counterparts using 40 percent less of the catalytic metals, and at lower operating temperatures, backs up her claims.

Comments Off on From butterfly wings to shrimp claws: Mimicking nature on the nanoscale #Biomimicry