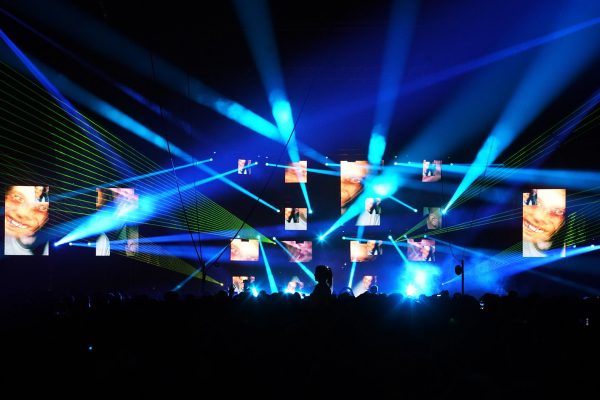 The guy who does Aphex Twin’s visuals has created a persona almost as mercurial and fascinating as the musician he helps out. Who is Weirdcore? Not even interviewers know. But the images he makes work perfectly with the ambient oeuvre of Aphex Twin. Here’s more from It’s Nice That:

“When people ask me what I do I tend to struggle a bit to be honest with you,” Weirdcore tells It’s Nice That. “I guess I just do anything that’s visual in some way. I think of myself as more of a designer, but it’s open to whatever medium. It has taken me years to get to this point though.” Originally studying graphic design, Weirdcore began working in computing, then marketing, before going back to graphic design when he moved to London, designing websites and DVD menus in Soho. In his spare time he began to create live visuals in clubs, “it was more like a hobby, well maybe not a hobby, but just something I would do at the weekend, not for the money,” he explains. “It just grew into getting bigger fees and became what I could do professionally.”

Weirdcore’s success in creating mind-altering visuals for the likes of MIA, Radiohead and Tame Impala, is the result of “perseverance really,” he says. “I was really struggling for ages, ages, but I just stuck at it. Suddenly it all came at once, it’s like London buses. It had got to the point where I was going to give up, that was it when it happened. I find that happens a lot in life, with various things, it’s when you take it to the point that you think you can’t take it anymore, that’s when it finally happens.”

Comments Off on How Weirdcore Makes Visuals for Aphex Twin #MusicMonday