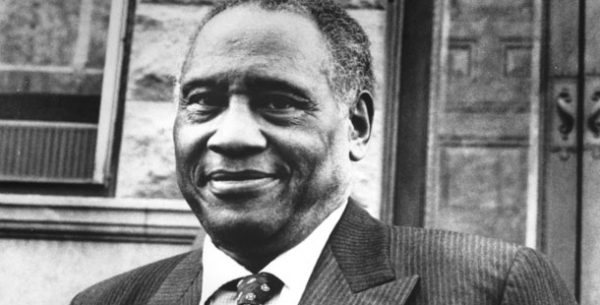 Paul Robeson was a lawyer, singer, actor, and activist who used his talent and voice to speak up and out against injustices towards Black people.

Born in 1898, Paul Robeson grew up in Princeton, New Jersey. His father had escaped slavery and become a Presbyterian minister, while his mother was from a distinguished Philadelphia family. At seventeen, he was given a scholarship to Rutgers University, where he received an unprecedented twelve major letters in four years and was his class valedictorian. After graduating he went on to Columbia University Law School, and, in the early 1920s, took a job with a New York law firm. Racial strife at the firm ended Robeson’s career as a lawyer early, but he was soon to find an appreciative home for his talents.

Returning to his love of public speaking, Robeson began to find work as an actor. In the mid-1920s he played the lead in Eugene O’Neill’s “All God’s Chillun Got Wings” (1924) and “The Emperor Jones” (1925). Throughout the late 1920s and 1930s, he was a widely acclaimed actor and singer. With songs such as his trademark “Ol’ Man River,” he became one of the most popular concert singers of his time. His “Othello” was the longest-running Shakespeare play in Broadway history, running for nearly three hundred performances. It is still considered one of the great-American Shakespeare productions. While his fame grew in the United States, he became equally well-loved internationally. He spoke fifteen languages, and performed benefits throughout the world for causes of social justice. More than any other performer of his time, he believed that the famous have a responsibility to fight for justice and peace.