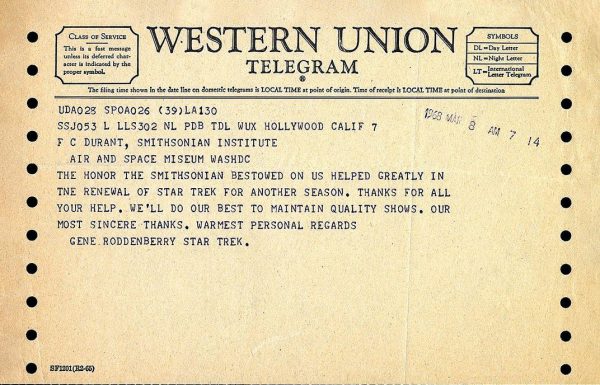 How NASA and Star Trek helped each other succeed.

via Air and Space Magazine

Set in the 23rd century, the groundbreaking series had attracted a loyal following of viewers who relished its serious approach to the genre of science fiction. Among the subset of fans who most valued this element of the show were some of the key people working in America’s space program, who saw the Starship Enterprise and its crew of high-minded explorers as the future embodiment of what they hoped to achieve. When the Apollo 1 tragedy occurred, people had been flying into space for less than seven years. Spaceflight was new and dangerous, and here was a show that made it feel routine. Star Trek offered hope to a nation and a space program in a moment when both had reason to doubt they would ever reach the moon, never mind the “new life and new civilizations” promised in the show’s opening-credits monologue. By 1967 NASA needed Star Trek—and, as it later turned out, Star Trek needed NASA.

Comments Off on How Star Trek Helped NASA Dream Big