She was the ‘secret’ Wonder Woman writer in the 1940s. Here’s how she finally got her due at 94 #Comics 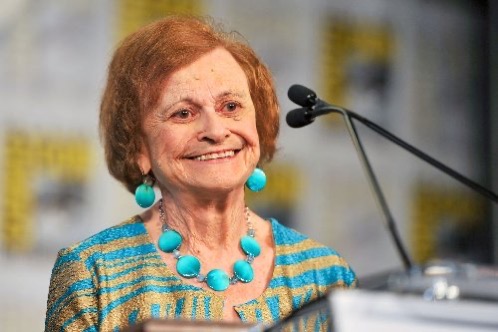 Joye Hummel, who was the first woman to write Wonder Woman, passed away on Monday. Learn how she finally got recognition via the Wasthington Post:

Joye Hummel Murchison Kelly stood before a Comic-Con International audience in San Diego in the summer of 2018 and basked in the applause. Just several years before, relatively few knew her name. Now, at 94, attending her first comics convention, she was being celebrated as the trailblazer she was

It had only taken seven decades.

Born Joye E. Hummel, Kelly was just 19 and a student at the Katharine Gibbs secretarial school in New York when she aced a psychology class taught by William Moulton Marston, co-creator of Wonder Woman. Impressed by her answers, he hired her as a studio assistant, and she graduated from typing scripts to writing them. A half-year later, when Marston was weakened by polio, she handled more and more writing. Her first story, “The Winged Maidens of Venus,” appeared in Wonder Woman No. 12, with a cover date of spring 1945, according to Lepore. She would work on Wonder Woman for a few years.

Comments Off on She was the ‘secret’ Wonder Woman writer in the 1940s. Here’s how she finally got her due at 94 #Comics