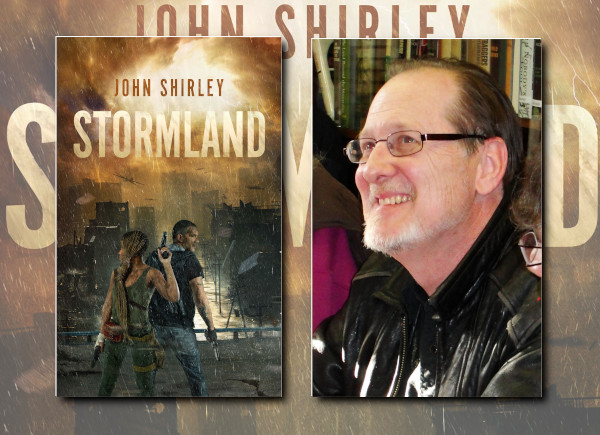 William Gibson famously called fellow c-punk OG, John Shirley, as “cyberpunk patient zero.” Shirley was writing cyberpunk before it had the sexy label (read City Come A-Wakin’) and was writing books like the A Song Called Youth trilogy that were surprisingly prescient of aspects of the world we find ourselves in today.

In this interview on The Nerd Daily, Elise Dumpleton interviews John about his latest novel, a cyberpunk detective thrilled called Stormland.

What can readers expect?

A novel that dramatizes the dangers and revelations and strangeness starting maybe twenty-five years from now. A serial killer who has nanotech brain surgery and becomes, in effect, a saint. A former U.S. Marshal who’s angry that the U.S. Marshals, in this story, have become corrupt, who delves into a far deeper darkness that embodies the sociological crisis accompanying the environmental one. A New Noir energized by action and jeopardy; a trip into that tunnel, again, but this one has silver veins of hope glimmering in the walls. Strange subcultures; weird tech. A story of diversity and unity in struggle…The pounding fist of a never-ending storm…

Where did the inspiration for Stormland come from?

Looking around at the emerging world. Reading about cities in crisis; about refugees and survival cultures of necessity in constantly stressed places. Being a person who’s pretty good at mentally crunching social and technological data and then projecting into the future with some accuracy (for example, long ago I predicted Deep Fake video and the dangers of it, and a good many other things, in the Eclipse/ A Song Called Youth novels) I was able to see an emerging national crisis clearly in my mind. So I looked for a metaphor to really make it stark and visible. I thought of the Big Red Spot on Jupiter which is said to be a permanent storm. So I posited—and rationalize—a permanent storm, literally; constant hurricanes 24/7 360 days a year, in an American city. Extreme weather conditions brought to a horrifying apex…And I thought, “Who would take advantage of a situation like that, and why? Who would stand up to them? And why?”