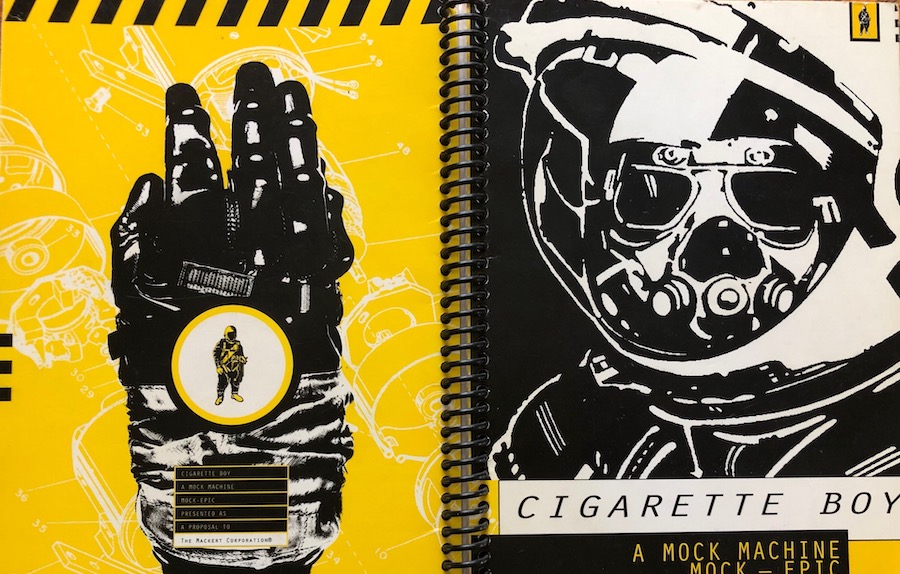 In 1991, while working on Beyond Cyberpunk!, I came into possession of the strangest book-artifact called Cigarette Boy: A Mock Machine Mock-Epic. Created by Seattle artist, Darick Chamberlin, the book had a huge impact on me, and on many others. Even cyberpunk OG, William Gibson, was a fan.

For completests of 1980s and 90s cyberpunk, you should definitely check out Cigarette Boy. It is available online, but I find the experience of the original artifact far more compelling, so snag a copy if you’re lucky enough to find one. 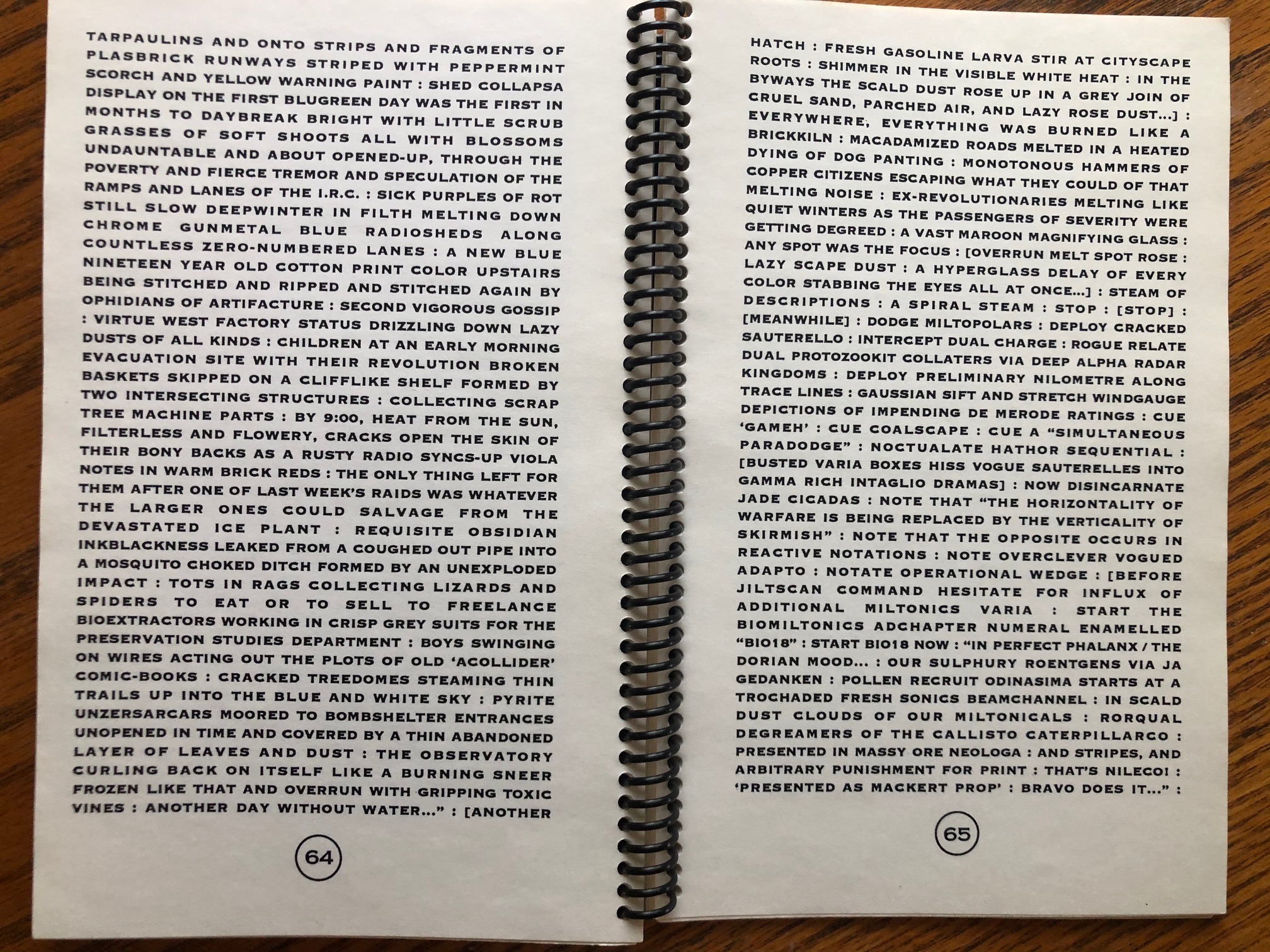 Here is the review I did of Cigarette Boy in Beyond Cyberpunk!:

In a future world of perpetual war and corporate subjugation, an AI Agent is invoked by its owners to initiate a data search in the world’s electronic “Metasource Omnifiles.” Its assignment is to put together a dossier on a mysterious rogue character known only as “Cigarette Boy.” Trouble is, the AI is having a bad day, feeling a little under the weather, no longer up to snuff. Truth be told, our AI agent has become, by some strange twist of neurons, totally deranged! Instead of assembling the usual tidy “hyperdocument” of “print scans,” “vidfiles,” and background data, the AI spews forth a horrific mass of jargon, ephemera, and frustratingly tiny fragments of useful information.

A copy of this bewildering pile of futuristic neuro-trash has been printed onto 84 eye-numbing pages and presented to you, dear reader, for your ultimate amusement and befuddlement. The result is Cigarette Boy: A Mock-Machine Mock-Epic by Darick Chamberlin. Done up like a wire-bound technical manual, Cigarette Boy is a stunning work of Burroughsian cut-up and dada data nonsense. It incorporates many dialects of technobabble: Cape Canaveral-speak, cyberpunkian street talk, bureaucratic mumbo-jumbo, and other uniquely 20th Century languages. There are no real sentences or paragraphs here, just page after page of character names, place names, fragments of action, various forms of bracketed “stage” directions and technical notes, along with lots of nifty and bizarre neologisms (see below).

Cigarette Boy started out life as a series of short-hand notes Chamberlin was taking in preparation for a more conventional cyberpunk SF novel. One day, he looked at his pages of coinages and idea fragments and discovered a kind of poetic elegance to them. He said they looked as though they were automatic writings channeled by some mad mechanical intelligence from the near future. He decided to keep working at this level. The result, as described in the book itself, is “an autoschematic protonovel.” Through its lists, notations, and slivers of narrative, it hints at a world beyond itself. It’s like going through someone’s damaged hard drive as a way of reconstructing their life . In “reading” Cigarette Boy, each person is called upon to fill in the blanks, to piece together a more coherent world of meaning. Jean Cocteau used to refer to certain of his more Dada-esque creations as “machines for the generation of meaning.” Cigarette Boy is very effective on these terms.

This artifact from the near future may not be for everyone. Those who have little interest in abstract painting, concrete poetry, Dada, and such “bookworks” as Tom Phillips’ The Humument will find this book a bewildering waste of time. For me, it is a joyous synthesis of two of my prime obsessions: abstract art and post-cyberpunk science fiction.

One Final Note:
I was shocked to discover that Chamberlin had not read any “proper” cyberpunk when he was writing CB (he was a Ballard, Burroughs, and Pynchon fan) and that he was not that familiar with computers (he wrote CB on a yellow spiral pad). He said that as someone trained as an artist (he’s a painter), he was just looking around him and reflecting what he saw. “We are daily barraged by bureaucratic forms, unintelligible receipts, obscure techtalk, and other exotic language ecologies that we don’t understand. There’s often more noise than signal. I just tried to capture the strangeness of all this.” After talking with him, I logged onto the Internet and was presented with the following. It’s the computer network equivalent of “Return to Sender. Address Unknown” (I’ve removed all the lines and formatting a la Cigarette Boy):

I think Cigarette Boy just made his case.

Here are a few words/phrases from Cigarette Boy: