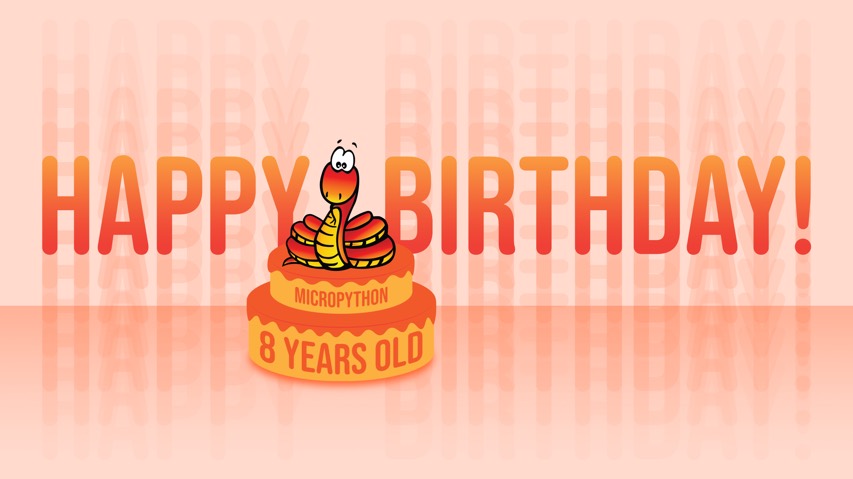 We celebrated MicroPython’s previous birthdays, last year in NYC we were dealing with shutdowns, death, sickness, and more – so we did not get a chance to do a post. But with a new year and 2021 going in the right direction, we are making some noise about the 8th birthday in all the ways we can!

Happy Birthday! We have stocked the official PyBoards from Damien, made direct donations to Micropython to support Damien’s work, make and share contributions, based on CircuitPython core on MicroPython and NOW with GitHub sponsors, we did a $5k sponsorship. Their goal is $5k a month in sponsors, so 1 full month is on us. We hope other companies and orgs that use MicroPython will consider doing a monthly or one-time as well. Companies / orgs can now sponsor, so this was Adafruit sponsoring. 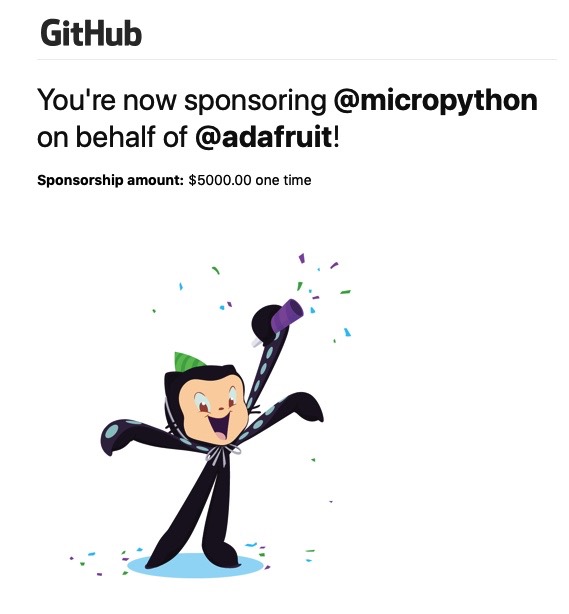 Here are some important milestone dates we checked with the creator, Damien!

April 29, 2019 is the sixth ‘birthday’ of MicroPython. At the April Melbourne Meetup, Damien George, creator of MicroPython, delves into his archives and shows the earliest code and notes about the goals of the language. The material pre-dates the first git commit! Listen in as Damien reveals how and why the language began and evolved. It’s a nice way to celebrate MicroPython’s sixth birthday!

Today is MicroPython‘s 8th Birthday! The 29th of April marks the date on which the first line of code was written, which is now 8 years ago!

It has also been exactly a year since the last newsletter… so here is an update on the main things that have happened since then.

In the past 12 months the main MicroPython code has seen:

We also joined GitHub Sponsors, which makes it easy for anyone to sponsor their favourite projects with a monthly donation. MicroPython is currently receiving USD$1250/month through this program, which goes towards maintenance of the open source code. Please visit our sponsor page and consider contributing!

Moving forward, we plan to make regular releases of MicroPython every two months, to make sure features and bug fixes can be taken up by the community more rapidly and regularly. We are also considering an overhaul of the forum (to use Discourse) and the wiki (to use MediaWiki).

For now you can enjoy the latest release of MicroPython, v1.15, which was released about a week ago. Find it here and firmware download here.

From the MicroPython team.

In newsletter #8 from MicroPython, Damien published some never-before-seen details about the start of MicroPython.

Here is an excerpt from the initial notes. The title is “Python board” and the date is 29 April 2013:

A piece of hardware that is small and cheap, runs python scripts, and has good low-level access to hardware. If we can do it with a single chip, that would keep it small and cheap. Need then something with a large amount of flash and a decent amount of RAM, that also is cheap enough. Atmel SAM’s have order 1MiB flash and 128KiB SRAM, for around $10 one-off.

Our strength would be small, cheap, simple, easy to replicate.

Can have a range of boards with different features. But all must be basically compatible and capable of running the same scripts.

Happy Birthday MicroPython! Thank you Damien for creating something special and open!