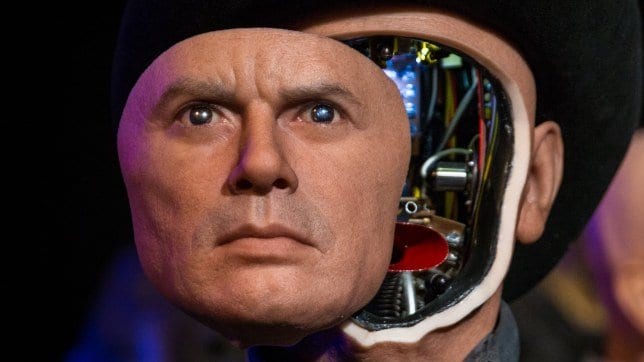 You may already be aware of the HBO series, Westworld, created by Jonathan Nolan and Lisa Joy. But have you seen the original 1973 film upon which the series was based?

Here is the review I wrote about it in 1991, in Beyond Cyberpunk!:

Novelist Michael Crighton (Andromeda Strain) wrote and directed this B+ movie about the Delos theme park, a future Disneyland populaed with state-of-the-art androids that come down with a deadly digital flu (an early exploration of computer viruses?) and all hell breaks loose. The fantasy environments of the park (choose from ancient Rome, medieval Europe, or the wild west), populated by said androids, become killing fields as the guests are picked off by synthetic thespians gone haywire.

Yul Brynner stars as a bad-ass gunslingin’ ‘droid who has it in for “white hat” park guest, Richard Benjamin. An intriguing concept, decent acting, and some neat F/X transcend the obviously meager budget.

Here an excerpt from the CyberPunk.com piece on the movie (and its follow-up, Futureworld):

Westworld was written and directed by Michael Crichton – the guy who eventually went on to write Twister, Jurassic Park, Congo, and Timeline, as well as the TV juggernaut E.R. This film couldn’t help but show it was under the helm of a novice director. Having only directed one (made-for-TV) movie, moving to feature length films was perhaps a step that Crichton wasn’t ready for. There are issues with pacing and tons of awkward silences; the whole viewing experience feels like a clunky collection of several short films pieced together. It still has its share of great ideas and moments though, showing the potential for greatness that Crichton would eventually achieve in the world of fiction.

The story of Westworld starts out pretty simply – two guys are coming to hang out and have the trip of a lifetime at the steep price of $1,000 a day (1970’s money). John, the buddy who is paying for this trip to help his pal Peter get over a divorce, is pretty positive this is going to be awesome (spoiler alert: it’s not his first trip). “Delos” is the name of the park, and it has three separate areas to enjoy: there’s a medieval park, Ancient Rome, and obviously a “western frontier” setting, which our protagonists have elected to visit. While they do spend some time showing the other worlds, they don’t really give you time to meet the other humans enjoying the park, and they also don’t even bother to introduce you to any of the Delos staff. There isn’t a lot of the story dedicated to the humanity of the people involved, or to filling out the backstory of the robots. The odd part about this lack of storytelling is that the movie isn’t particularly long, coming in under 90 minutes. There was some room to develop the script if they wanted to, but Crichton chooses to leave the peripherals pretty bare.