Are straight bolts of lightening a sign of dark matter? 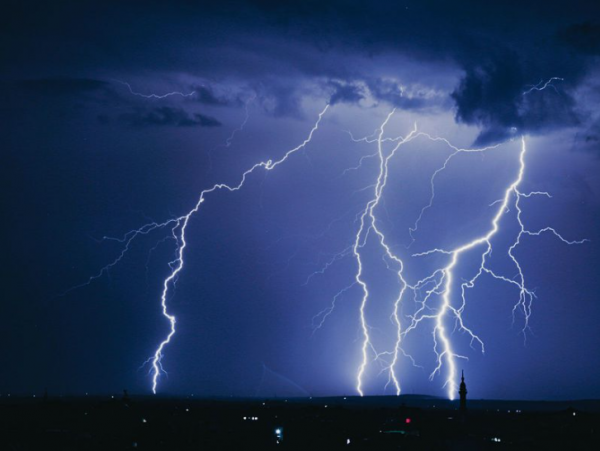 The leading theory is that dark matter is made up of elementary particles, perhaps created some 14 billion years ago at the time of the Big Bang. These hypothetical objects are called “weakly interacting massive particles,” or WIMPs. Typical WIMP searches employ huge vats of an ultra-dense liquid such as xenon; if a dark matter particle hits the liquid, physicists should be able to see the radiation emitted by atomic nuclei as they recoil from collisions with WIMPs. But numerous such experiments have found nothing so far—leading some scientists to wonder if dark matter may be made of something else altogether. Macros are one of several alternatives to WIMPS that have been put forward. The idea is that dark matter, rather than being composed of elementary particles, is actually made up of macroscopic clumps of matter. These clumps may weigh as much as a few ounces, perhaps the weight of a golf ball. However, because of their extreme density (several hundred pounds per cubic inch), all of that mass would be packed into a space about the size of a bacterium. But, crucially, macros are unlikely to be just sitting around; more likely, they’re whipping through space with speeds of between roughly 150 and 300 miles per second (compared to roughly a half mile per second for a rifle bullet).

Comments Off on Are straight bolts of lightening a sign of dark matter?