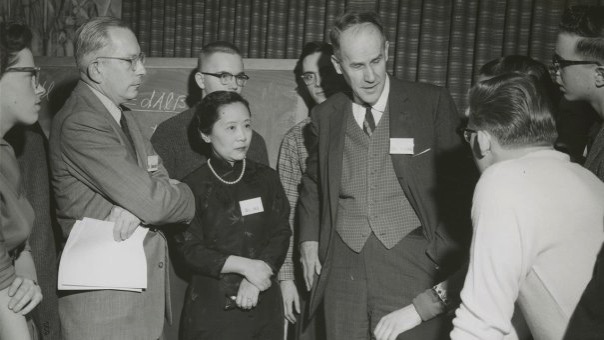 Chien-Shiung Wu was a Chinese-American particle and experimental physicist who made significant contributions in the fields of nuclear and particle physics, Via Atomic Heritage Foundation

Unable to find a research position at a university, Wu became a physics instructor at Princeton University and at Smith College. In 1944, she joined the Manhattan Project at the Substitute Alloy Materials (SAM) Lab at Columbia University, focusing on radiation detectors. When the B Reactor at Hanford mysteriously shut down soon after it began operating, Wu helped identify poisoning by xenon-135 as the culprit.

After the war, Wu was offered a position at Columbia and began investigating beta decay, which occurs when the nucleus of one element changes into another element. She made several significant contributions, including making the first confirmation of Enrico Fermi’s theory of beta decay.

In 1956, she was approached by theoretical physicists Tsung Dao Lee and Chen Ning Yang who knew about her expertise in beta decay. They asked her to devise an experiment to prove their theory that the law of conservation of parity did not hold true during beta decay. The law of parity states that all objects and their mirror images behave the same way, but with the left hand and right hand reversed. Wu’s experiments, which utilized radioactive cobalt at near absolute zero temperatures, proved that identical nuclear particles do not always act alike. This resulted in Lee and Yang receiving the 1957 Nobel Prize in Physics for their theory, but Wu’s work was not acknowledged.

Wu continued making significant contributions throughout her life and won several awards and honors. In 1958, her research helped answer important biological questions about blood and sickle cell anemia. She was also the first woman to serve as president of the American Physical Society. Her awards include the National Medal of Science, the Comstock Prize, and the first honorary doctorate awarded to a woman at Princeton University. She also won the Wolf Prize in Physics in 1978. Her book Beta Decay, published in 1965, is still a standard reference for nuclear physicists.