50 Years of Text Games: 1984 – The Hitchhiker’s Guide to the Galaxy #VintageComputing #Gaming

Aaron A. Reed reviews the classic text adventure game The Hitchhiker’s Guide to the Galaxy released in 1984.

Douglas Adams, at first, did not like computers. In fact he had built a career out of making fun of them with his Hitchhiker’s Guide franchise, which began on the radio before spilling into other media, most famously a bestselling series of books. Hitchhiker’s is hard to summarize, but one of its overarching themes is that technology, in the hands of big business and bloated bureaucracies, does not make life better: in fact it makes it far, far worse. Hence characters like Marvin, a robot given a “Genuine People Personality” who promptly becomes terminally, insufferably depressed; Deep Thought, tasked with finding the meaning of life and coming back six million years later with the number 42.

While living in Hollywood for a year as he attempted to write a Hitchhiker’s screenplay, Adams bought his own computer, and he got hooked.

…he discovered interactive fiction. He played Adventure, and then got turned on to the games of Infocom: Suspended, in particular, fascinated him. He “discovered that there was a sort of great world of wit and invention and logical problems” in text games. “And I suddenly thought, ‘I would love to be doing this.’”

While Adams originally wanted to do something other than another Hitchhiker’s adaptation, it was by far the most obvious choice for a project, and he perked up at the notion that the game could be more experimental than previous incarnations.

Read much more in this well written review and history of the game.

Would you like to play the game? BBC Radio 4 has an online version here. 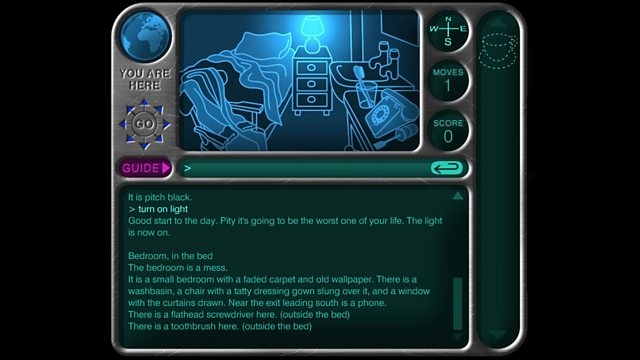 Comments Off on 50 Years of Text Games: 1984 – The Hitchhiker’s Guide to the Galaxy #VintageComputing #Gaming