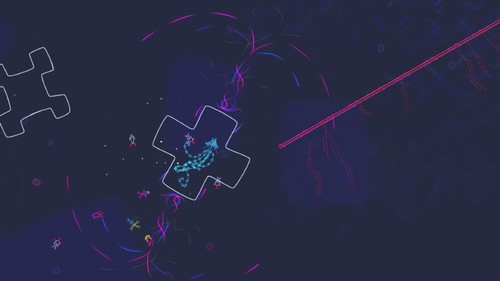 Video game critic Tim Rogers famously characterized Pac-Man as a game about movement, the first of its kind to focus on that aspect of video game interaction. And while video games have come a long way since Pac-Man, have not escaped the influence of that flappy-headed dot-muncher. Ynglet is a game that is similarly about movement, but like the classic game Rez, Ynglet incorporates music at such a deep level that it almost becomes an instrument itself. Here’s more from WAYPOINT:

In the same way that I’d consider Rez to be a music game dressed up as a shooter, Ynglet, released last week for PC, is a music game that resembles a platformer. Its maker, Nicklas Nygren, developer of cult favorite Knytt, says it doesn’t have any platforms, but this isn’t quite true. In Ynglet, platforms are bubbles, and if you fail to reach the safety of one, your avatar, a small, tadpole-looking creature, falls out of the screen into a vast empty abyss. Like any classic 2D platformer, you must make it through a series of obstacles in order to complete the level. It’s ostensibly simple, but the secret sauce lies in how its music, visuals, and interactivity talk to one another. The result? My eyes, ears, thumbs, and brain tingle when I play Ynglet.

Comments Off on Musical Platformer Plays Like an Instrument #MusicMonday